All news fit to publish goes in EaterWire. Sitting on some juice? Drop it in the tip jar. 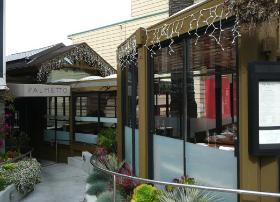 COW HOLLOW—The new inhabitant of 2032 Union Street—probably better known as the former location of Palmetto—will be Nettie's Crab Shack. The concept, as should be evident from the name alone, is a casual seafood eatery, and an opening is currently slated for the autumnal months, just in time for Dungeness season we suppose. [EaterWire]

MILL VALLEY—We wouldn't have fingered rock legend Carlos Santana as a Marin resident, but apparently he is. Also, his Maria Maria chain has begun work on its Mill Valley location, replacing the shuttered, longtime local fave Cantina: "The new restaurant will be more upscale than the old family favorite and margarita destination, but owners say they will do their best to lure neighbors back with contemporary Mexican food ... Santana is not involved with the day-to-day operations of the restaurant but is a fan of DSE restaurants, which include Joe DiMaggio's in San Francisco, Bing Crosby's, McCovey's and a Maria Maria in Walnut Creek." [MIJ]

'BUCKSWIRE—A Denver columnist continues his crusade to get Starbucks to right its ship, by offering some damn lemons with its overpriced ice tea. The entire column is an entertaining read, and here's an excerpt: "Everybody has an idea about how to improve Starbucks. Here's mine: How 'bout a slice of lemon to go with that $2.10 iced tea? Go almost anywhere else, order tea, and they've got lemon. But not at Starbucks, where both hot and cold tea sell for a premium ... I wrote a column about this glaring deficit in the "Starbucks Experience" in 2004. Back then, nobody seemed to care about any negative publicity that might be associated with not offering lemons. But now that Starbucks is slipping, maybe they will listen." [Denver Post]