All the day's tidbits go in EaterWire. Have something to add? The tipline is ready. 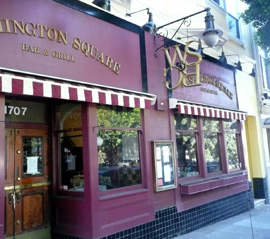 NORTH BEACH—The rumor du jour, as shared by the Scoop, involves Liam Tiernan of Tiernan's taking over the Washbag: "PlumpJack might still be in the picture, but, according to [Tiernan], he and his wife and co-owner, Susan, have the key and are ready to get going as soon as the Washbag emerges from bankruptcy proceedings .. That means the Washbag could be back up and operating by Labor Day." More fodder for the fire: several commenters have chimed in with some thoughts regarding last week's eviction notice. [Chron]

UNION SQUARE—We shared some plywood shots from Urban Tavern earlier today, and as if on cue, Lady Hopstress brings forth some juicy rumormongering from the Hilton front: "Donna Scala was helping to conceptualize and develop the high-end gastropub for the hotel—I heard a rumor that she was not going to be involved with the project once it launched, and it ends up Laurent Manrique is now going to be the chef!" Manrique just relaunched Fifth Floor and the Hilton is mum on the rumors, but this could be a biggie if it fleshes out. [TH]

BAY AREA—Even though dozens now have salmonella and a number of chain restaurants have pulled tomatoes, local tomato farmers predictably couldn't be happier: "... some Bay Area growers were optimistic that the multi-state salmonella outbreak could increase business at their small operations. 'When you buy on a local level I think food is a whole lot safer,' said Janice Smith of Smith Family Farms outside of Brentwood. 'We can trace it back. (A salmonella outbreak is) not something that would happen on a small farm.'" [IBA]