Have a tidbit fit for EaterWire? The tipline is anxious and waiting. 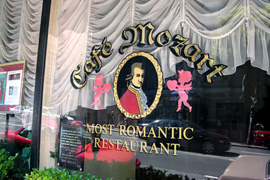 NOB HILL—Word on Bush Street is that Cafe Mozart—the 28-year-old restaurant that bills itself as the most romantic restaurants in the city (even though it actually resembles what we imagine to be an Austrian grandmother's living room)—is up for sale. Last we heard, it's still open per standard operating procedures, though it definitely qualifies as one of those restaurants that you wonder who exactly goes there. [EaterWire]

TEAM USA—Herr Cutlets reports that America's yet-to-be-chosen representatives in the Bocuse d'Or competition will be coached by Roland Henin: "Henin is the executive chef of Delaware North Park Services, the company that handles concessions in most national parks. He has also coached at the Culinary Olympics in Germany and is one of the few master chefs certified by the American Culinary Federation ... he’s been a mentor not only to Keller, but also chefs as diverse as David Burke and Emeril Lagasse." [Cutty via Eater]

SAN FRANCISCO—Just when you thought Top Chef couldn't go beyond Top Chef Junior, in strolls Top Chef: The Tour: "The promotional tour will feature a customized traveling 'Top Chef' 18-wheeler semi-truck and will offer Bravo's passionate fans and cable affiliate partners with the unique opportunity to experience the hit series in their hometowns." Be warned: this monstrosity rolls into San Francisco on August 2nd and 3rd. [NewsChannel]