All the day's news and notes go in EaterWire. Kindly pass along your sightings. 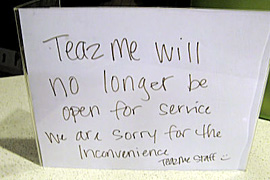 FERRY BUILDING—FiDi workers who frequent the Ferry Building on a regular basis during lunch hours might want to make sure to stop by tomorrow, because plywood vet Boccalone is scheduled to debut. The salumeria by the Incanto Boys is about 300 square feet, and will have a selection of hot and cold gourmet sandwiches along with the usual salumi we've all come to know and love. [EaterWire]

SAN FRANCISCO—You can finally breathe easy, for the fast food outlets that banned tomatoes have rekindled their relationships with the salmonella'ed veggie-fruits: "Wendy's International Inc. spokesman Denny Lynch said Tuesday that the hamburger chain began restocking restaurants Sunday with tomatoes from northern Florida. He said some Wendy's locations may still not have tomatoes but should be supplied soon ... Burger King Holdings Inc. started restocking its restaurants with tomatoes last week. McDonald's Corp. has said it won't resume serving sliced tomatoes until it's able to obtain enough that meet safety and quality standards to supply the whole chain." [AP]

RYAN'S WORLD—On Thursday, Ryan Scott will be one of 25 bachelors on auction at Ruby Skye. He lists his favorite restaurant at Hollywood's Lucques and his favorite place on earth is on a beach with Coronas. Ladies... [SFLuxe]