As usual, your news, notes, sightings and gossip are all welcome to the tipline. 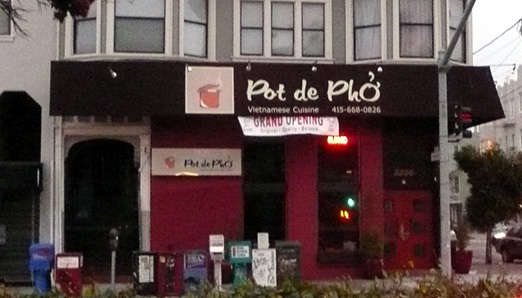 THE RICHMOND—After being open about six months, we're just about ready to declare Pot de Pho a flop, and it looks like Pot de Pho agrees. You'll recall that the Geary venture by Ana Mandara honcho Khai Duong opened back in December, but now there's new "Grand Opening" signage outside and they've tweaked the menu to include more dishes (more apps, noodles, fish). Pho is one of the those things that's best in its non-gourmet form though, so we'll see how this turns out. The Committee has taken notice. [EaterWire]

THE EMBARCADERO—Not only will La Mar Cebicheria have that aforementioned ceviche bar, but there's going to be another type of bar too. From 7x7: "There will be a Pisco bar, serving up 25 variations of Peru's national drink, and a ceviche bar where raw fish combinations will be cut and mixed right in front of you. They'll be using Peruvian ingredients (like the blisteringly hot aji chili) but pairing it with local seafood and, invariably, plenty of goodies from the Ferry Building next door." Do we sense a pisco trend? By the way, full reveal on the current state of La Mar is here. [B+B]

LISTLAND—Rounding out the week, we have a pair of national publications honoring some locals by including them on their lists. Forbes Traveler names the best ice cream joints in all the land and it should come as no surprise that Bi-Rite Creamery is front and center. Elsewhere, it's not online yet, but the July issue of Bon Appetit has a list called The Bon Appétit Hot Ten: Summer Blockbusters: "These are the restaurant openings for Summer 2008, with marquee chefs and lots of buzz." San Francisco's representatives are Epic Roasthouse and Waterbar, which is ... interesting. [Forbes/BA]