Join us for another edition of Adventures in Shilling, wherein we celebrate the grossest shills from around the world wide web. As always, you too can help fight shills. 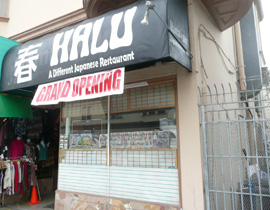 Let's dive into the shameless self- aggrandizing right away. Up first, we have the week-old Halu, which proves that not even endearing, eclectic neighborhood restaurants with Beatles posters are immune to the temptation of shilling on the interwebs, not mention horrible grammar:

This is the new rockers haven in the Richmond.!! Rock posters adorn the walls,rock music is played...and a rock and roll drummer ,Shig ,cooks the amazing food.Mimi,his delightful wife is also behind the counter. Halu is billed as a "Different Japanese Restaurant"..meaning for me,no sushi. instead,great yakorti,deep fried or not....ramen bowls...yummy stuff. Lots of veggie options! It's a small place,between Geary and Clement on 8th avenue and there is a nearby public parking lot. Refreshing spin on the usual Japanese cuisine offered around the city. Casual atmosphere....fresh and innovative!!! Get hip to Halu!
Shill Probability: 49%

Aside from the uncontrollable enthusiasm, notable red flags include names and parking situation; still, it could be just an(other) overzealous first review. More blatant instances coming up elsewhere:


The most common shills occur right when a place opens, and when a restaurant responds to bad press. Over in Glen Park, Sangha got off to a rough start, but this slightly-fishy review thinks everyone should go back... ASAP:

Now, because I'm a Latin American ingredient addict, as soon as I saw the menu for Sangha I knew I had to give Japanese style sushi another try. I went to Sangha over Father's Day weekend and the menu choices just blew my mind. At first I ordered the items I had read about on Yelp (which many people on Yelp are raving about Sangha) - ecstasy roll, jalapeno fritters (tasty, but would probably only order if I had guests in town), spider roll, tuna tartar with taco chips (yummy!), and a selection of raw fish that I asked the waiter to pick out for me. The flavors were incredible. The cilantro and avocado emphasis, the ginger sauce, the tempura inside the rolls, and the quality of the fish, left me craving the entire meal all over again the next day.

I understand that the decor of the restaurant irritates some people, but if you go there with fun company and just focus on the food, who really cares if the place looks bland?! I know where my eyes were at during the whole meal - completely focused on the creative presentation of every dish!

They don't have nice wine glasses, so we brought our own in and they were supportive of our decision, which doesn't always happen when you bring your own stems to restaurants.

I would highly recommend this restaurant. Sometimes it takes new restaurants a little while to figure out the nuances so maybe try it again if you haven't had a great experience before.
Shill Probability: 75%

Any review from opening night claiming a new restaurant is "the place to be" always gets our attention, especially from a first-time reviewer. What do you think, Long Bar?:

Last Night was the opening night and it was fantastic! Sat at the bar and had a cold beer, and relaxed, then had another beer. Ordered the New York Steak which was cooked to perfection and they didn't mind that I asked for mashed potatoes instead of fries!

Chris and Daniel, the bartenders made every effort to know your name and learn it.

It is great to see they have redone the bathrooms, which it needed.

The decor is fantastic and the wine list is across the board.

This is the place to be!!
Shill Probability: 87%

And it just wouldn't be a proper edition of Adventures in Shilling without a word from our favorite froyo shillers Jubili, now would it? From the comments field on a post about the opening of Tuttimelon:

This place ripped off the walls/tiles of jubili and the chairs of icebee. i thought SF prided itself on originality and independent thinking.
Shill Probability: given past word choice, 98.5%