All the day's news and notes go in EaterWire. Feel free to drop your tidbits in the tipjar. 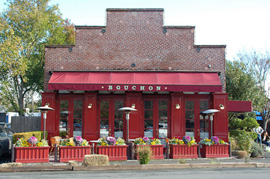 YOUNTVILLE—Once again, Bouchon will be the place to be on Bastille Day up in Kellerville. Come Monday, July 14th, Bouchon will put on a six-hour party (3pm-9pm) that will be open to the public. The expected live music, wine, dancing, and French bistro fare will be front and center throughout the evening, and because The Great Keller is always a man for the people, the first half of the celebration will even feature child-friendly activities like face-painting, drawing and sous vide for kids apple-bobbing. It's a three-day weekend in the making. [EaterWire]

LOWER HAIGHT—Starting at 6pm tonight, Toronado will begin pouring some special beers that are rare, new and Belgian: "There are going to be some very interesting beers. It's doubtful you'll see some of these elsewhere. One was selected at the brewery by David [Keene]. They start pouring at 6 p.m. No admission, of course, just pay for your beer." Full list of special beers here. [What's On Tap]

'BUCKSWIRE—Maybe Starbucks is coming to its senses after all: "Starbucks will remove rotating CD racks from the floors of 6,500 stores in the U.S. and Canada by September to focus on four CDs it sells near cash registers. 'It's an opportunity to focus on a small number of titles and tell those stories well,' said Doug Cavarocchi, a Starbucks spokesman. It is an incremental move in Starbucks' effort to return to its coffee core." Yes, this should fix things. [Seattle Times via Starbucks Gossip]