Share All sharing options for: Week in Reviews: PlumpJack Cafe Stays at 2.5, MORE!

Today's edition of Week in Reviews is, frankly, a doozy. We've got Bauer visiting a turbulent PlumpJack Cafe for the third time in 16 months, Josh Sens at the new Fifth Floor, and a host of newbies, including Domo and Beretta. If that weren't enough, we've even crowned an official "phrase of the day" from one of the reviews. Buckle up for the ride. 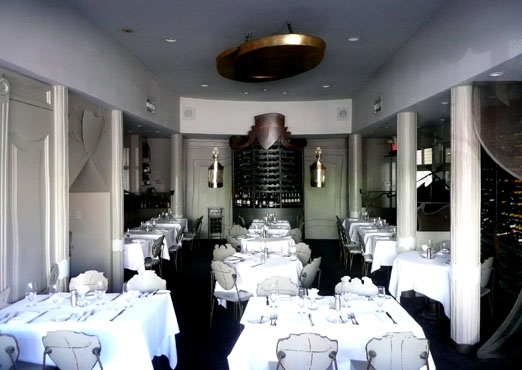 After peaking at 3.5 stars under James Syhabout only last year, PlumpJack Cafe continues its fall from grace with a "simplified" menu from the restaurant's early-90s heyday. However, the classic/snoozer menu isn't the problem; it's the nightly consistency in the kitchen:

Still, after two Update visits I left somewhat confused; the first dinner was excellent, but the second was marred by several problems. What you still get is very good service from a staff that has been there practically from the beginning, a well-priced wine list, and the handsome, whimsical Leavitt-Weaver decor that features custom metalwork, posh surfaces and wine racks ... On a return visit a few weeks later, the menu had changed slightly and it felt as if the chef had taken the day off. There were unusually long waits between courses and problems in execution.

In the end, the onetime crown jewel of the PlumpJack Empire retains the same 2.5 stars to which it was demoted back in the fall. [Chron]


Next up, we have Josh Sens filing his July review from the new, Laurent Manrique version of Fifth Floor, where Manrique remains great, but will anyone notice?: "There's little doubt that Manrique has a deft hand in the kitchen, but he can't control the world beyond. Fifth Floor is a high-end hotel restaurant in a time of wallet watching, an expense-account indulgence christened at a moment when all of us except the Gettys are contemplating shredding our credit cards. Success depends on so many factors. Laurent Manrique has shown up—now he'll have to wait and see if diners do the same." [SFMag]

Paul Reidinger is the first mainstream reviewer to hit the Mission's newest hotspot, Beretta: "The menu, meanwhile, is like the love child of SPQR and Pizzeria Delfina. In other words, it hosts a wealth of exquisite small plates ... But for many — if not most — of the tables (not to mention the community table), a pizza is the main event, to judge by the pizzas that seem to come sailing out of the kitchen like Frisbees." [SFBG]

Ms. Meredith takes us through her typical two meals, this week at Bar Jules, where we learn about animating intelligence, which is officially the phrase of the day here at Eater HQ: "It wasn't only delicious and vibrating with freshness, but also clearly the product of a true style, an animating intelligence in the kitchen that knows what it likes. It's almost like eating in somebody's home ... [Boncutter] likes simple food, whose few ingredients taste of themselves and are equal in importance." [SFW]

The Chron's Amanda Gold rounds out the big publications review circuit by handing out 2.5 stars to Hayes Valley's Domo: "Over the course of three visits, almost every dish was imaginative enough to spark conversation, including an interesting variation on tuna poke ($9.50) with sweet nibs of well-cooked octopus. Though the cubes of tuna could have been cut smaller, they were fresh and appealing ... this is simply a sushi shop - no bells and whistles required." [Chron]

THE BLOGS: The Daily Feed embraces the 3pm meal at T-Rex, Slow Food does Mission tapas at Ramblas, the Single Guy has plenty of blurry watermarked photos from his visit to the Castro's Lime, and for some reason, La Tablehopper decides she now likes open kitchens in her visit to Conduit.