Have a nugget of intel fit for EaterWire? Toss it this way, please. 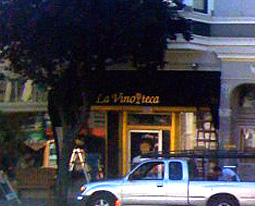 THE MISSION—We're still not sure if Luisa Hanson and the City have cleared up AwningGate or not, but we do know the following with some degree of certainty: a) according to a tipster and the accompanying photographic evidence, the disputed awning was returned to its upright position sometime today, b) per our conversation with the building department earlier, there were still a few violations on record, and c) La Vinoteca should continue to be a show to behold. Get a good seat. [EaterWire]

ALAMEDA—Three San Francisco locations in hand (plus one in DC), BurgerMeister is making the cross-bay leap to Alameda, and according to this Craiglist ad, BurgerMeister #5 (with full bar) should be opening very soon in downtown Alameda. But people, haven't we already learned our lesson about Alameda? [Craigslist]

BAY AREA—Via Eater LA comes word that in honor of National Doughnut Day on Friday, all Krispy Kreme outlets will hand out free calorie bombs on June 6. The official KK site says there are only four outlets in the extended Bay Area—Daly City, Pinole, Union City and Mountain View—so be warned. [~ELA~]