All the day's news and notes go in EaterWire. As always, the tip jar is unscrewed. 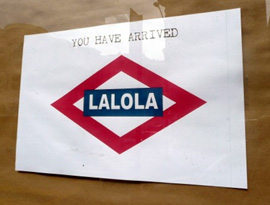 RUSSIAN HILL—Even though chuckle every time we see the sign for Lalola, but we still have (completely unfounded) high hopes for the place, based mainly on the cute space, high on a cable-car-laden hill. Work is underway, and the details on Lalola still trickling in, but we're hearing that it's going to be a Spanish restaurant. [EaterWire]

POLK GULCH—Remember De Afghanan Kabob House? You'll recall that the little Polk Street eatery got a nice Bargain Bites write-up in the Chron back in December, only to have its BYOB policy exposed, leading to a frenzy by the City to shut down the liquor party. Well, six months later, poor little De Afghanan finally got its liquor license. Congrats! [EaterWire]

ZAGATLAND—After putting their $200 million Zagat empire on the market in January, Tim and Nina have decided to rethink things: "Zagat Survey is no longer looking for suitors. Instead we are going to try to follow a path of 'organic growth." Riiiight. Organic growth. Nothing to do with a lack of a buyer. [Eater]

CHINA BASIN—And finally, a PSA: after a few days underwater, Acme Chophouse is back in business today, as scheduled, unfortunately, just in time for a Giants road trip. [EaterWire]