The first half of the two-part Top Chef season finale whisked everyone away to Puerto Rico. Since the finale was just filmed in April (months after the original filming), all four of the remaining cheftestants looked a little different, but Lisa stole the show, sporting a new, short haircut, almost as if she wanted to hop on the faux-hawk bandwagon of late '07. And as if you expected anything less from the show, the episode featured—nay, embraced—plenty of tears, swine, surprises and drama.

Elimination Challenge: After a slow-motion, voiceover-filled fiesta, the chefs were given a whole pig and had to create at least two dishes using different parts of the animal. (At this point in the episode, Chris Cosentino squealed in envy.) The "twist" was that Spike, Andrew, Nikki, and Dale came back to help the cheftestants. Because she won the QF, Stephanie got to assign sous chefs, hording Dale to herself, but resisting the urge to screw over her counterparts.

Quote of the Episode: "Lisa is a bit much for me sometimes." — a polite Richard, trying his best to bite his tongue regarding Lisa's, uh, attitude.

The Winners: The two strongest chefs all season, Stephanie and Richard, took home victories. The Stephanie/Dale combo proved to be a good one, and even though Dale left the pork belly out overnight, the mistake led to the winning chicharrones dish. Richard took the top prize, and won a car. Alas, it was only a Toyota Corolla, and judging by his speechless reaction, Richie B. was either very shocked or very apathetic. 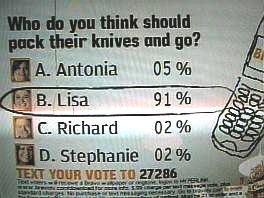 The Losers: Lisa and Antonia ended up on the chopping block, and seeing as how she's barely escaped every week, everyone (even the Top Chef poll) thought Lisa should be the one to be sent packing. But that would be too obvious, right? In a shocking decision, Antonia was sent home for her unsophisticated plating and undercooked peas. Tears followed, and back in the waiting room (complete with Puerto Rican Glad products!) Stephanie and Richard were shocked at the decision. Then, in one of her bitchiest moments to date, Lisa actually got mad at the other contestants for not congratulating her. Given some of the decisions this year, we think next season might be time for the Top Chef overlords to start considering previous challenges during judgment.

Highlights: Richard's short pants, Padma's ethereal toga-dress, Andrew's command of the Spanish language (or as he so eloquently put it "looking like a retard"), Bizarro Tom, Lisa getting pissy after the elimination, the Toyota Corolla and Glad cameos, Lisa guaranteeing a darkhorse win next week.
· All Top Chef Coverage [~ESF~]