This is The Gatekeepers, where Eater roams the city to meet the fine men and women standing between you and some of your favorite dining destinations. 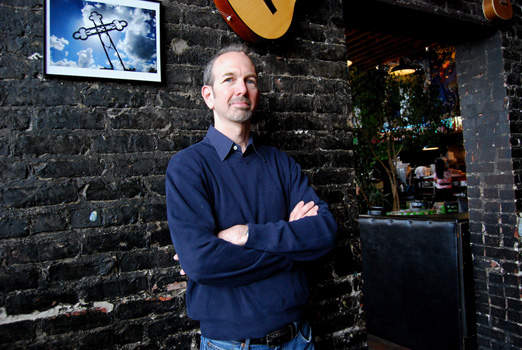 If you've ever found yourself at Cha Cha Cha on a festive evening, you know that the neighborhood standby is not often a serene scene. Reservations aren't taken, it's packed most nights, alcohol is aplenty, the crowd is eclectic and all things considered, it might be one of the toughest Gatekeeper tasks in town. So, here we have Hugh O'Connor, who for over a decade has controlled the busiest dining room in the Haight.

Hugh O'Connor, Host at Cha Cha Cha: We could fit 85-90 in the main restaurant, 18 seats are available for dining at the bar. My favorite would have to be table #6, next to my podium; it does have a strict dress code policy on weekends, casual attire is fine for the other tables. 8 PM on a Saturday night. What's the wait for a table? Lately we've been at around 1 ½ - 2 hours at 8 PM, of course if you come a little earlier or later you'll get in much faster. Is there anything I can say to make my wait shorter? Sure, "We'd love to eat at the bar!"

Tell us about your favorite customers? Any celebs been by recently? We do have a large number of loyal customers and we enjoy all of them. Mick Jones came by a couple months ago and ordered at some food to take with him, Jeff Bridges and family dined here several months ago, my favorite has to be The Corrs sisters many, many years ago. How do you deal with VIPs, when there are no tables left to give? We don’t take reservations so we don’t normally have tables that sit open for these moments, we do have a bar folks can wait in, if I can get them in a little earlier I do. ...the owner’s friends? They’ll call ahead and let me know they have someone coming in, doesn’t happen very often so it’s not really an issue.

What’s the most outrageous request from a customer you’ve had to accommodate? We had a group in town from Australia that was to perform at the Opera in the Park the next day, they wanted to do a song or two, I turned off the house music they strolled through the restaurant singing at a decent volume, it was great! ...that you couldn’t accommodate? Just the normal bachelorette party request.

How has the neighborhood changed since you started working here? Many times over, the Upper Haight is a part of town that is constantly changing, all the live music venues are long gone, several years ago we got the Amoeba Records store down the street. Has the clientele changed since opening? Not really, we still get a large number of students, locals, tourists and people that have been coming in since the beginning back in the mid ‘80s,

You've got have some great stories from working here, right? Several years ago we had a very overly affectionate couple drink quite a bit while waiting for a table, they carried on through the meal, witnessed by all the other customers in the restaurant. They decided not to tip the server and accidentally left her cell phone behind. Moments later the cell phone rang and was answered by an employee who described what he saw, it was her boyfriend, not her dinner date, I think he called back a couple times in total disbelief.

What's the most popular dish? And which is your favorite? Everybody loves the Cajun Shrimp, it is a great sauce, I’ll tend to order from the specials menu, you’ll tend to get something more interesting.

What's the best thing about working here? Working here has given me a chance to meet such a large number of people as well as reconnect with folks from my past, I’m certain neither would have happened otherwise, got to be the biggest plus. What’s the one Gatekeeper tool you need to do your job? Patience, and you’ll need a lot of it.