Have some intel fit for EaterWire? The tip jar is very ready. 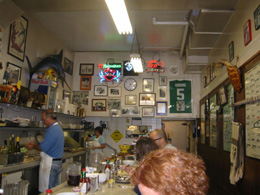 POLK GULCH—Right on schedule, Swan Oyster Depot has reopened after its Fourth of July vacation. The stools still go up at 20 past 5 and all is right in the world. [EaterWire]

SAN FRANCISCO— Will the Quickly-Ed Jew mess ever go away? The answer, it would appear, is a simple "no": "...the restaurant chain at the center of the matter -- Quickly -- is still hovering in purgatory. You recall that one of the charges against Ed was that he tried to extort $80,000 from Quickly to help the chain's stores get permits required of franchise operations in the City. To this day, Quickly still doesn't have the permits." Oh, that crazy Ed Jew. [Bronstein at Large]

THE MISSION—A tipster sends along the news that some fresh blood has arrived at the shuttered 1500 South Van Ness space: "Word is that a new chinese restaurant is about to open up in the old Ebb Tide space at 26th and South Van Ness Ave." [EaterWire]

VIDEO GAME WORLD—Oh boy, Major League Eating: The Game was released today: "The game is for one or two players, with the killer feature of online play and leaderboards. Requiring players to 'master a smorgasbord of offensive and defensive weapons including bites, burps, belches, mustard gas, and jalapeño flames while cramming and chewing food at a world-class pace.'" [SE]