Have some juice fit for EaterWire? Kindly pass it along to the tipline. 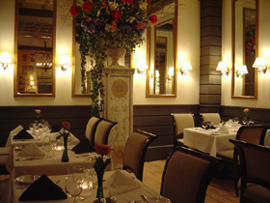 SOMA—The Hoss Zare era is ready to begin at the Fly Trap. According to a tipster's bounceback message from OpenTable, the restaurant will shutter after tonight's service. The planned remodel will reportedly make the 102-year-old restaurant more lounge-like: communal table in, piano and white tablecloths out. [EaterWire]

GHIRARDELLI SQUARE—The people at Bar Marche and Marche on the Square and the rest of the Marche Ghirardelli festivities wanted to pass along that Bar Marche is officially open. Even though the upstairs dining area is not yet ready (as we mentioned earlier), the entire menu is currently being served at the wine bar. If you're a local and have frequented the pre-Danko Ghirardelli Square and the Marches, let us know your early thoughts. [EaterWire]

SONOMA—The chef merry-go-round continues at French Garden, where owner Dan Smith keeps falling well short of his coveted Michelin star: "Smith has named Frenchman Didier Gerbi (a Craigslist find, no less) to the position. Recently arrived from the Languedoc region of southern France, Didier will be overhauling the menu to better reflect more Mediterranean influences over the next few weeks." We'd also like to suggest a name change to something less generic and less like the best restaurant in the country down the road. [BiteClub]