All the day's news and notes go in EaterWire? Send along your sightings to the tipline. 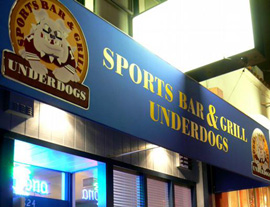 THE SUNSET—Nick Fasanella (Nick's Crispy Tacos) just took over Palermo/Spiaggia Deli, and now he's going to be taking Underdogs Sports Bar & Grill too. The first catch is that he's holding a contest and taking suggestions for a new name and concept for the now-dismal bar, which is not be confused with Underdog, the vegan sausage joint next door. The second catch is that the prize for said contest is $500 ... credit at the bar. So there's that. [SFist]

'BUCKSWIRE—At long last, Starbucks has released the list of the 600 stores to be closed this summer. For the most part, San Francisco was largely immune to the purge: only two stores are slated to shutter: one in the Metreon and the other at 901 Market. Across the bridge in Berkeley, the store at Shattuck and Cedar will also get the ax. [BuxGoss]

TEAM USA—We released the list of eight nominees for the Bocuse d'Or competition earlier today, and now there's a replacement for Craft's Damon Wise, who withdrew his name after being named. From Cutty: "Chef John Rellah Jr., executive chef at Hamilton Farm in Gladstone, New Jersey. Rellah, we are informed by Team USA, is 'former executive chef of the Union Club in New York' and has 'experience working at Lespinasse and Le Bernardin.'" [Cutlets, previously]