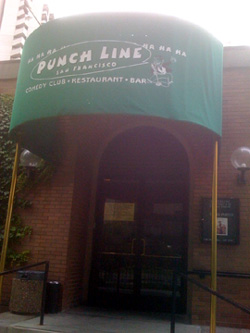 FiDi: Apparently, nothing pricks up local ears—and cameras—quite like a change of ownership notice involving Wolfgang Puck, as more than a few people have sent in queries like the following:

While the prospect of a something along the lines of Spago Laugh (sorry) would surely be must-see dining, but alas, the real explanation—as explained by Team Wolfgang—is not nearly as provocative, or funny. Here's what Puck's people had to say:

The ownership of Punchline Comedy Club is not changing. What happening is a division of Wolfgang Puck Catering is doing non-branded concessions with Live Nation, the club operator, in a number of its clubs, Punchline being one of them.

In other words, the club's food is done by Puck's catering company (license application is here), and according to Punchline, no changes are anticipated. Sorry kids and Wolfie fans.