Have a juicy tidbit for EaterWire? Toss it in the tip jar, would you? 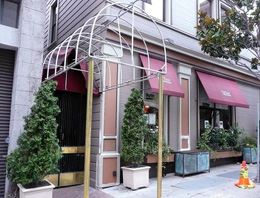 SOMA—On the eve of August, Hoss Zare has set a date for the new version of the Fly Trap, or rather, Zare at Fly Trap. We took a look at the doings earlier this week, and now comes word that the grand (re)opening is set for next Friday (08.08.08, you see). It should be one of the more interesting/notable openings of the summer, seeing as how the evening will not only mark a rebirth for the 102-year restaurant, but also the return of Zare to the restaurant world. [EaterWire]

OAKLAND—We announced the East Bay project called Kaffir a little while back, but "due to the various meaning of kaffir," the owners have changed the name of the 14th Street Asian street food restaurant to Banyan14. Please adjust your records. Opening is still on track for September 1. [EaterWire]

THE MISSION—Oh noes, someone is robbing taco trucks (and shooting people) in the Mission: "The attempted robbery was reported near a taco truck at Harrison and 20th streets at 9:28 p.m., where police found two people suffering from gunshot wounds ... Officers had also responded a short time earlier to another taco truck robbery on 16th and Shotwell streets, but no shots had been fired at that location." [CBS]