The summertime lull might be taking effect as far as big openings go, but The Dish still brings news of a few openings of varying shapes and sizes. Per standard operating procedure, fee free to send along your sightings. 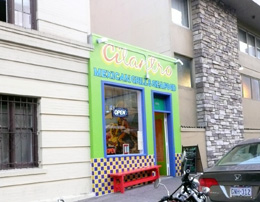 1) Yountville: The grand opening isn't until the weekend, but Michael Chiarello's flagship NapaStyle store is officially open for business. We've touched on the amenities before (cafe, patio, wine tasting, etc.), so we'll relay this anecdote: "...during an early morning coffee run this past weekend, the Little Man and I were strolling by the new store only to see someone dressed in white chefs clothing unlocking the doors from the inside. That someone was Michael Chiarello himself–he made one of those faces adults make when they're saying hello to a baby and said a quick 'good morning' to both of us and we continued on our way." 6525 Washington Street, in the V Marketplace; (707) 945-1229; website [EaterWire]

2) Polk Gulch: From the idyllic Napa to Geary/Polk. Cilantro debuted recently, and as you can see from the photo, it certainly has a precious look, brightly sandwiched in between two bigger building. In fact, a tipster hit the nail on the head in saying that it looks like something out of Roger Rabbit. Night owls may want to note that it's open until 2am on Thursdays, Fridays and Saturdays. 1035 Geary Street, between Van Ness and Polk; (415) 931-6065 [EaterWire]

3) Oakland: Quoth an East Bay tipster: "After months of "lights on, nobody home" and seemingly years of 'closed for remodeling' at Vo's on Grand Avenue in Oakland, they finally opened last week. More info can be had over at Chowhound, where they live for stuff like this. 59 Grand Avenue, between Broadway & Webster; (510) 465-2000; website [EaterWire]

4) SoMa: Speaking of reopenings, we thought we'd note that Chili Lemon Garlic, which shuttered its original Mission location last week, is in full swing in its new SoMa location. The menu is pretty much the same, and there's a giant Opening banner that you have to duck under (seriously, that thing is four feet from the ground) to enter. 518 Bryant Street, between Fourth and Third; (415) 826-8199 [EaterWire]

5) Geyserville: We mentioned the debut of Diavola quickly yesterday, but just in case you missed it: it's a pizzeria and salumeria from pig freak/master Dino Bugica, there are all kinds of artisanal pizzas on the menu (including lardo), and the logo is one of the more frightening restaurant logos we've encountered. 21021 Geyserville Avenue, Geyserville; (707) 814-0111; website [EaterWire]