EaterWire: Minibar Sets a Date, Plus a New Chef in Napa

Share All sharing options for: EaterWire: Minibar Sets a Date, Plus a New Chef in Napa

Have a tip suitable for EaterWire? Operators are standing by. 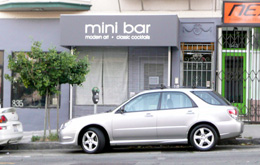 WESTERN ADDITION—If all goes to plan, Minibar will open in all its 15-foot-wide glory this Friday. The natives have been excited about the long-awaited little project at 837 Divis (near McCallister) and its cocktails, which will probably play better than the barbershop that was there before. [EaterWire]

NAPA—Don't look now, but Napa is getting a new restaurant, and it's not exactly another run-of-the-mill Wine Country restaurant: "Indian chef, restaurateur and cookbook author Neela Paniz has chosen the Main Street West building to house her new downtown Napa restaurant featuring seasonal, contemporary Indian cooking. Paniz was chef-owner, along with partner David Chaparro, of the Bombay Café in West Los Angeles for 18 years before selling it" [NVR]

SAN FRANCISCO—According to a Forbes article (study?), San Francisco is the third hardest-drinking city in all the land, just behind the glorious cities of Austin and Milwaukee. The survey was based on three questions: "whether they had at least one drink of alcohol within the past 30 days; whether men had more than two drinks per day or women one drink per day; and whether they had five or more drinks on one occasion." [Forbes]