All the day's news and notes go in EaterWire. Your findings to the tipline, please. 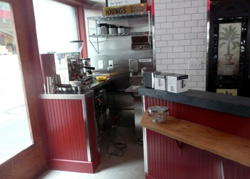 FINANCIAL DISTRICT—From a post on Chowhound comes word that Dennis Leary is now putting The Sentinel's revolving lunch specials and daily soup up online. Today's special lunch was tuna tartare and pickled cucumbers with butter cake and nectarines. And lo and behold, there she is. [EaterWire]

THE MISSION—Man Seeking Coffee shares all kinds of news from the recent months at Ritual Roasters, including new staff, a revamping of the menu, public "cuppings" and a bevy of new vendors, including in the East Bay and New York. Sounds like someone is trying to brace for—keep up with—the caffeine competition. [MSC via CBS]

BLUE BOTTLE'S WORLD—Earlier this week, Blue Bottle made its New York debut at the Gramercy Tavern, and now James Freeman tells the Times that more Big Apple doings might be en route: "And though Blue Bottle doesn’t have immediate plans to move here, James Freeman, the owner, said it was possible that his company could sign a New York City lease in the next 12 months. 'There are no leases signed but, if this goes well for us, I’d much rather buy a Probat and a Sprinter' — that’s a brand of roaster and a brand of delivery truck — 'and get a lease in the boroughs than ship coffee across the country. It’s a more interesting way to roast coffee, and it leaves a less intrusive footprint.'" [NYT]