The Dish: Lou's at the Square Debuts, Peddles Free Booze

Share All sharing options for: The Dish: Lou's at the Square Debuts, Peddles Free Booze

All the latest openings, big and small, get served up on a regular basis by The Dish. Spot a newcomer in your neighborhood? Operators are standing by. 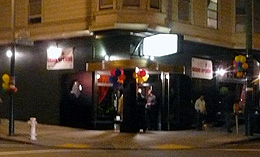 North Beach: Last night, after a hiatus of six weeks or so, the ill-fated Avenue G reopened in its new jazz club form under the guise of Lou's at the Square. It is owner Jim Arrington's third try in the high-profile space on Washington Square Park, and according to a tipster, the "Lou" involved is an old woman who used to manage at Lou's at the Wharf "a long time ago," and it's not the owner (that was Lou Ferrari). So last night, the new place opened, and three bouncers manned the balloon-laden door while flagging down pedestrians with offers of free drinks. A curious move, though it seemed to work ... kind of.

The good news is that they've ditched any restaurant misconceptions in favor of a standard bar, and that's probably a better bet in the area, as seen from the decent crowd last night, not to mention the kitchen flops of the last go-round. The bad news is that the walls are pink, the "stage" is in the low-ceilinged former dining room, and of course, the track record of those involved is not exactly encouraging. But as a wise man once said, in America, there's one word that says it all: you never know. 1570 Stockton Street, at Union; (415) 989-0399
· Signage Alert: Avenue G Becomes Lou's at the Square [~ESF~]
· Deathwatching: Avenue G Closed For "Concept Remodel" [~ESF~]