All the day's news and notes go in EaterWire. Have something to add? Send it along. 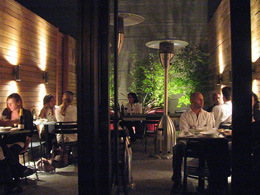 THE MISSION—It is already one of the better ones in the city, but at this very moment, the patio at Bar Bambino is being redone, complete with a "new stiletto heel-safe ground covering." The quick facelift should be done by Wednesday, if not tomorrow, and to christen it, the BB folks are starting a series called Italian Pop Saturdays. [EaterWire]

THE DOGPATCH—Checking in with the Esprit Park development that will house Urbino (aka the 130-seat project from Team A16/SPQR), SF New Developments has some recent shots of the construction, and reveals that about half of the condos have been sold. We've been hearing that things might be a bit delayed on the restaurant front because the units might not be selling as quickly as anticipated, so that winter '09 aim might be a hopeful estimate. [EaterWire/SFND]

NAPA—The only Bay Area rep on Forbes Traveler's list of the best wine lists in America is Meadowood: "... even though a resort and restaurant like Meadowood, which Wine Enthusiast magazine calls 'the Mother Church of Napa Wine,' in St. Helena, Calif., lies smack in the heart of Napa Valley’s wine country, it stocks a list as rich in European and New World wines as it is in Californians. Master Sommelier Gilles de Chambure also oversees a nightly wine reception, holds wine classes and leads wine excursions throughout the valley—participatory options offered by no European restaurant " [Forbes]

FLORIDA— Upon learning that his Subway sandwich order was made incorrectly, a Jacksonville man threw a hissy fit and called the police. When the cops finally showed up ... at Subway, they ended up arresting the man and throwing his sandwiches away. [First Coast News via Eater]