Share All sharing options for: EaterWire: La Boulange Nears, Sonoma Gets a Brewery

All the day's news and notes go in EaterWire. Pass along your intel to the tipline, please. 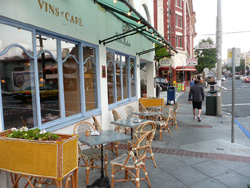 RUSSIAN HILL—It's looking like a fairly quick turnaround for the old Le Petit Robert space on the corner of Polk and Green, with the new expanded version of La Boulange slated to open on October 2nd, according to a Craigslist ad. The next (and possibly final) shoe to drop in the Polk Street tale is the fate of the current La Boulange space; will Roland Passot take it for himself? [CL]

SONOMA—Yet another new brewpub is coming to wine country, according to William Brand: "It's Sonoma Springs Brewing Company. It's slated to open its doors at 750 West Napa Street, Sonoma in mid-September. The co-founder and brewer is Tim Goeppinger. They plan to supply area pubs and bottle in a limited fashion. Tim's big interest is German-style lagers and ales." [WOT]

EMBARCADERO CENTER—Chalk up another shuttering to the day's growing count. From the tipline "It looks like Briazz, that quickie coffee/pastries sandwich & salad place in Two Embarcadero in FiDi may have closed down last week I don't know any of the particulars, but saw maybe two weeks ago that they were clearing some stuff out, and then last week, saw that the windows were papered up. It was closed all last week." The phone is disconnected too. [EaterWire]

BOSTON—And coming in over the nanny state wire, we find out Boston is the latest big city to hop on the bandwagon and has now banned trans fats, effective last Saturday. [Boston Globe]