Attention industry people, a new scam is making the rounds through the local restaurant scene, and as is the case with most half-baked scams, it's rather entertaining.

The ploy is as follows: a Las Vegas man sends a very affable and even flattering letter to an upscale restaurant—see the full letter post-jump—that claims that during a recent dinner, his wife was accidentally bumped by a table attendant, who "grazed her new Gucci blouse with a greasy plate." Given the special dinner occasion, the "victim" did not bring up the issue at the time, but since the drycleaners couldn't get the grease stain out, the scammer is asking the restaurants to simply reimburse the drycleaning expense (oddly, not the ruined blouse itself). A receipt for $51 is attached to the letter, and this letter has already been received by a handful of local restaurants, including the Ritz-Carlton Dining Room, Aqua and Fifth Floor. The best part is that the letters aren't even customized, which suggests that we could have a wannabe mass scam underway. In any event, here's the sneaky letter in question: 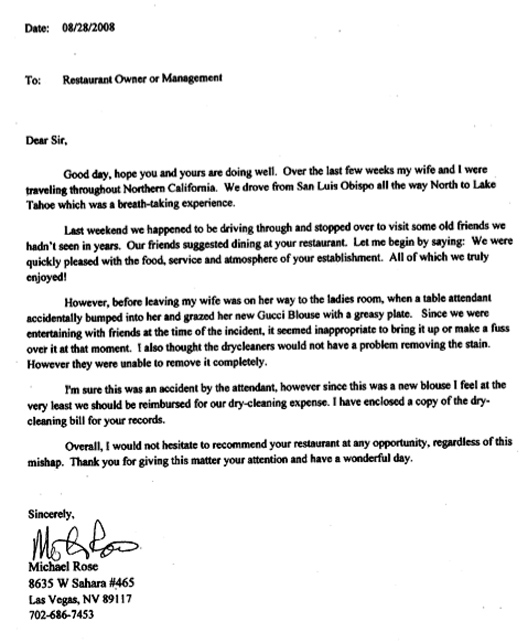 Industry folk, have you caught wind of other devious scams making the rounds? Do let us know. [Photo: Jennifer Yin]