Have a piece of intel fit for EaterWire? Drop in the tip jar, would you? 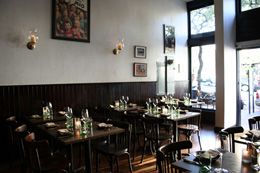 PAC HEIGHTS—We've received a veritable bevy of emails wondering about the new liquor license "expansion" signage at SPQR, with speculation running rampant from a takeover of the laundromat next door to hard alcohol. Well, as much as we love the prospect of a grappa after the cacio e pepe, we're sad to say it's not that exciting: Team SPQR simply had to jump through the ABC hoops again because of the two tables they want to put outside. Carry on. [EaterWire]

UNION SQUARE—During the month of October, Jean-Georges in New York, Jean Joho in Chicago, and Hubert Keller in San Francisco will pay tribute to their mentor Paul Haeberlin by serving Haeberlin's signature Salmon Soufflé dish in their restaurants. Once upon a time, all three chefs all trained under Haeberling at his three-star Michelin L'Auberge de l'Ill in France. [EaterWire]

LAGASSELAND—No, Emeril hasn't gone off the deep end with his corporate sponsorships. Nope, not at all: "Crest Whitening Expressions needs a fresh, clean catchphrase, so who better to reel in video submissions with ideas than the Catchphrase King. Emeril Bam! Lagasse." Mercy. [SE]