Share All sharing options for: The Shutter: Fournou's Ovens Done After 35 Years

All closure notices arrive via The Shutter. Please report all sightings to the ShutterLine. 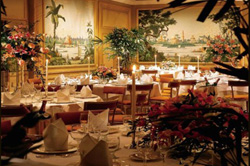 Nob Hill: The plug has finally been pulled on old-timer Fournou's Ovens, which has officially made the leap from past-its-prime hotel restaurant to special events venue. The move, you'll recall, is part of the Stanford Court Hotel's $35 million renovation and will soon be followed by the debut of the restaurant replacement, Aurea.

As for Fournou's Ovens, the dated 70s-era restaurant never really grew on locals (even going back to the last decade), and with the hotel remodel, the original plan was for Fournou's shuttering to coincide with Aurea's opening. However, we've been told there have been some minor hold-ups on the Aurea side, but per its tracking report, a debut within the next two weeks is still expected.
· Fall Tracking Report: Aurea [~ESF~]
—Photo: official site