With so many new restaurants readying for fall debuts, we're here to keep you updated on the latest on each project, and when you should start thinking about that resy. 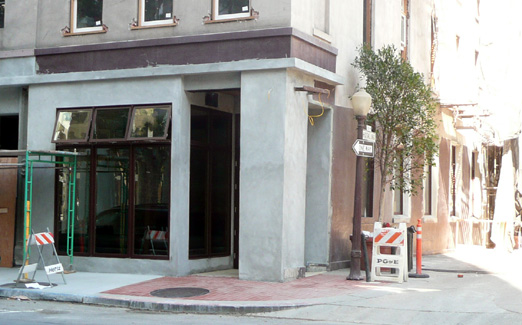 Financial District: One thing you have to admit about the Vintage 415 guys is that they plan their endeavors around a suitable audience. Like trendy Mexican at Mamacita tapped the Marina, Taverna Aventine is about playing to the FiDi crowd. The two-story space—literally at the base of the pyramid on Washington Street—is an ode to the city's Barbary Coast days of yore, with the decor (brick walls, antiques, dim lights). Food will be offered, but will be simple, given the tiny half-kitchen they're working with. Probably more importantly for office workers, there will be to-go lunch options during the day, and then later in the afternoon, the project's main gimmick comes into play: from 3 to 7, the downstairs is a "members only" zone, with personal liquor lockers and everything (It's just a matter of time before those ultra-exclusive bars now popping up in NYC like hot dog carts make their way westward). The Aventine space is not yet done, but they're scrambling to make this week's soft openings and next week's anticipated debut.