All the day's news and notes go in EaterWire; the tip jar is ready for your sightings. 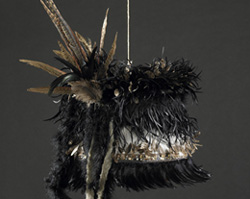 DANKOLAND—Gump's has asked a host of local creative celebs to create/decorate lamp shades for charity, including Gary Danko. The lamp shades will be worn on models' heads (really) and then put up for public auction. Gary Danko's feathery masterpiece is pictured to the right, though we had to cut off the, ahem, tail for formatting purposes. You can bid on it right here and see more details about it (spoiler: "plumage and fur"). GD might not want to quit his day job, but we're officially rooting for his inflammable lamp shade to get the highest bid out of the lot. Let's make this happen, people. It is, after all, for charity. [Chron]

UNION SQUARE—It's starting to seem like Ryan Scott may be enjoying his celebrity chefdom. The Mission Beach Cafe chef will participate in the inaugural edition of Macy's City Bites series in what they're calling an "exploration of honey." The shindig takes place tomorrow night (9/10) at 6:30pm at Macy's Union Square. Further details here. [EaterWire]