Have some intel fit for EaterWire? Drop it in the tip jar. 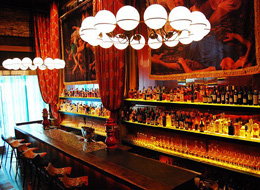 UNION SQUARE—Gitane, only a few months old, is sweetening dinner with free alcohol. From City Dish: "Throughout the month of January, Gitane will be serving guests a complimentary glass of Olorosa, Bodegas Barbadillo sherry as an aperitif before dinner. The goal is to introduce diners to Gitane’s unique sherry program..." [CityDish]

THE CASTRO—All kinds of changes are underway for the Castro's bar scene, according to BAR. As Eater Commenters surmised last month, The Bar on Castro will be closing. New owners will take over that space in February, while owner Greg Bronstein "moves" his operation to a space on Church Street. Elsewhere in the area, Toad Hall is still a work in progress, and ownership shuffles are going down at the The Metro and Expansion, among others. [BAR]

FOOD MEDIA—Is Ruth Reichl's excellent food magazine doomed? Some are already predicting its demise: "Gourmet will probably not see the end of the year. Its parent company, Conde Nast, can no longer rely on the huge profits of the newspaper portion of the Newhouse family business...It owns Gourmet, Bon Appetite, and epicurious.com. Conde Nast simply owns too many titles in this category. From 2004 to 2008, Gourmet’s ad pages have dropped from 1,364 to 955, with a 24% drop last year. January’s ad pages were down another 32% according to MIN...it will have to migrate totally to its website." [24/7 Wall St. via ENY]

OAKLAND—There have been rumblings of an Oakland offshoot of Burma Superstar going back to the Alameda location's closing, and now comes confirmation. Witness the liquor license application for Burma Superstar at 4721 Telegraph (between 47th and 48th). [EaterWire]