Share All sharing options for: The Shutter: Breezy's, Laurel's, Bar on Castro, More

All closure notices arrive via The Shutter. The tipline awaits your sightings. 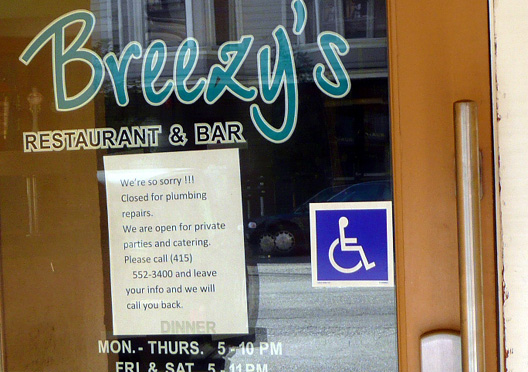 1) Hayes Valley: A few folks have been wondering about the goings-on at Breezy's, which has been shuttered for at least the past week or so due to alleged "plumbing problems." As a tipster points out, it's a bit worrisome that it is still open for private parties, the OpenTable account is offline, and the sister restaurant Hayes and Kebab (which shares the kitchen/bathroom) is still open. The answering machine says it will be closed for "at least several weeks." Curious, no? [EaterWire]

2) Hayes Valley: Just on down Gough, Laurel's Restaurant has shuttered as well, and more convincingly. Paper and permits now adorn the storefront, which you'll recall will be morphing into Otoro. [EaterWire, previously]

3) The Castro: A week ago, the neighborhood paper put together the definitive guide to the ongoing—and seemingly endless—ownership shuffles on the Castro bar scene, and over the weekend, one of the bigger moves finally took place. The Bar on Castro had its final night in its current incarnation. It will be reopening as The Bar on Church, hopefully this week; moving into the Castro Street space will be another bar called Q Bar. [EaterWire]

4) San Rafael: One last restaurant that didn't return for 2009 (hey, news travels slow from Marin): "Chopsticks closed effective January 1, 2009 as it lost its lease. There is a note on the door that they hope to open elsewhere in Marin." [Chowhound]

5) Oakland: From IBA's nightlife blog: "... it’s still a shock to hear that Geoffrey Pete, a well-respected Oakland insider who could operate a school in how to run a successful nightclub, is throwing in the towel. He would only say Tuesday that Geoffrey’s on 14th Street is closing and he plans to lease the space to a church and non profit. For what purpose, he didn’t say." [IBA]