Have a tidbit fit for EaterWire? Toss it in the tip jar. 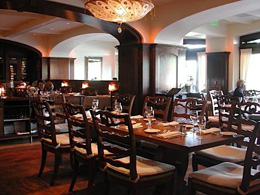 SAUSALITO—For second consecutive year, Poggio will be holding its annual Gran Bollito Misto Festa from February 3rd to 7th. In his three-star review almost a year ago, Bauer anointed Poggio's simmered meat dish one of his all-time faves. Also? The pricetag is a recession-friendly $19. Well, plus bridge toll. More info here. [EaterWIre]

OMAHA—An Omaha man went to apply for a job at the local Subway shop. Halfway through filling out an application, he decided it was much easier to just rob the place with a knife instead. You stay classy, Omaha. [AP]

FOOD MEDIA—Spurred by the cuts at Food & Wine, Vinography muses on the future of wine writers: "One of two things will happen: either we will soon see the rise of an AFL-CIO backed Union of Wine Writers, whose mighty collective bargaining power will turn wine writing into a highly sought-after career with long term salary growth and security... or... there will soon be even more wine bloggers out there." [Vinography]