As always, if you spot a closure for The Shutter, do pass it along. 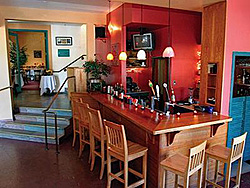 1) Berkeley: Yesterday marked the final day of operation for 15-year-old Shattuck spot Cafe de la Paz and its adjacent Country Joe's Cafe & Music Hall. The official, simple explanation: "We simply ran out of money and we're having difficulty refinancing. Given the dour projections for the economy in the coming year, there didn't seem to be any real alternative but to say farewell to our location at Cedar and Shattuck in North Berkeley." [EaterWire]

2) North Oakland: The news first broke over a month ago, and on New Year's Eve, nine-year-old neighborhood favorite Jojo turned off the lights for the last time. Mary Jo Thoresen, Curt Clingman and the rest of the team will be moving into event planning after a short break. [EaterWire, previously]

3) Calistoga: After a tad of uncertainty last week and some very curious public outcry, we have confirmation that Wappo Bistro is indeed closing today. Sources at the restaurant say that they just couldn't come to a reasonable agreement on a potential new lease with the landlord; at this point, there are no plans to reopen elsewhere. [EaterWire]

4) Mission: SF Weekly's music blog All Shook Down brings word of the end of Pink: "Pink, the Mission's only dedicated house nightclub for the past half-decade, will be closing its doors after one last party this Saturday, January 3." [SFW]