The Shutter: Marche on the Square, Cafe Revolution

Share All sharing options for: The Shutter: Marche on the Square, Cafe Revolution

The week's bloodshed continues. Keep passing along your sightings to sf@eater.com. 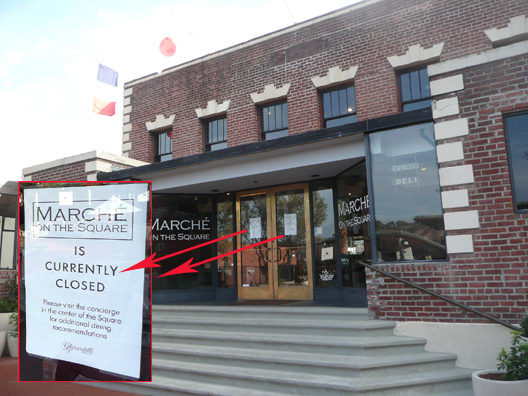 1) Ghirardelli Square: Late yesterday, Marche on the Square, the months-old ill-fated bistro/market that has been trying to lure locals back to Ghirardelli (free advice: bistro fare with sushi is not the way), was mysteriously and suddenly shuttered. According to a tipster on the scene, security guards and permit violations might have been involved. Today, inquiring calls have gone unanswered and spot checks merely result in the above signage and a dark interior. Odd. Anyone have more intel? [EaterWire]

2) Napa: Main Street's Cafe Revolution has closed after 15 months. Because they weren't allowed an outdoor hookah bar (across the street from a Catholic school, mind you), the cafe's young owners aren't very happy with the current of affairs in the town of Napa: "The hookah bar would have been a big revenue generator, Hammond said ... Hammond is bitter about the city's treatment of their business. 'It appears that we have sold our youth out for tourists, he said. 'In a normal city, when you open something cool, they let it fly,' Michael Mendez said. In Napa, 'if it’s not a wine bar, don’t bother.'" While that might be true, they clearly haven't been to North Beach. [NVR]

It’s Official: the Castro Can Welcome New Bars for the First Time in 35 Years