Top Chef Episode 8: Luuuke, You're Not My Mother

Share All sharing options for: Top Chef Episode 8: Luuuke, You're Not My Mother 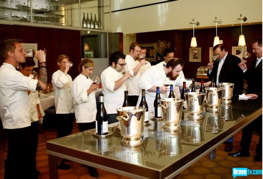 Oh man, this week's episode TENSE with a capital "Robin." How much does everyone hate her? So much. That is the answer. Robin keeps getting that answer wrong, though, and thinks she can solve all the problems by talking so much, about everything. That might work better if anything she said was not the most annoying. "Guys, is it cool if open this drawer? I had just planned earlier to get something out of the drawer but I can get it later if it's not cool. Anyway, just grabbing a spoon. You know, it's really funny, but people forget that pretty much anything you can eat with a fork you can eat with a spoon. Why do we even have forks? Just scoop your food! Well, I guess it'd be hard to to hold steak while you were cutting it with your spoon. Maybe if the spoon was really sharp on the end? Then I might cut my mouth! That reminds me of when I struggled with an illness. Hahahahah." Everyone hopes she cuts her mouth. Maybe she is all speeded up on Stacker II. That would help explain why she's so freaking cut. She is built like a brick shithouse. I wouldn't want to be on the business end of her Tae Bo workout, you know what I'm saying? Check out her sick Pilates. She is like Finding Nemo. Swim! Be free!

Renowned restaurateur and chef Charlie Palmer is this week's guest judge. He owns a ton of restaurants and is very successful. We have him to thank for American cooking, apparently? Oh really, Mr. Palmer? Ever heard of the Native Americans?? I thought so. (I don't know anything about history.) The Quickfire is all about pairings. Pairing is hard! Like Padma pairing that giant belt with anything. Am I right, fellas. Who am I, Tim Gunn? "Make it snore!" (Because me talking about fashion is boring.) The cooks have to pair food with Alexia's new Crunchy Snacks. Oh that is great. What a challenge! Ash says that they've been munching on these snacks in the house and, "they have lots of flavor. It's incredibly difficult to pair something with such complexity in a dish." Yeah, the complexity is the problem. Those little chips are so complex. The spaz from A Beautiful Mind won the Nobel for discovering the theory of those chips. "Woah, am I tasting a wine that has been buried in the dessert for 800 years, or are these Flaming Hot Ranch-B-Q Waffle Chips? There is no way for my mouth to tell. We're gonna need a bigger scientist!"

A fun fact is that Bryan worked for Chef Palmer for 10 years, and his brother Michael worked for him for one. Will he show favoritism? Who cares. What matters is that Charlie Palmer looks a LOT like Mr. Belvedere. I hope that just like Mr. B Chef Palmer throws out historical facts as metaphor while reviewing everyone's food. "Well, Wesley, upon trying your monkfish, I'm reminded of Prince Eugene of Savoy, stunted and sickly, pallid and hunchbacked, he rose above those who ridiculed his appearance, by driving the invading Turks back into the Straits of Bosphorus. What I mean is this monkfish is gross. You are the weakest link. Goodbye!"

Robin, Ash and Jennifer end up on the bottom. Ash and Robin sure are used to that! Jennifer will be insufferable about her overdone pork the rest of the episode. Bryan, Kevin and Eli are on top. Eli had been all snooty about his cooking school training earlier, how he truly understood how to pair flavors, and apparently it paid off. He wins! That ninety grand he spent at the Alexia Institute for the Study of Crunchy Snacks doesn't seem like a waste now, does it? Eli revealed earlier in the episode that he lives with his parents, and as this is his first win, I imagine he will run back to the house and call them. "I mean, it's cool. I don't have to pay rent." Wow, Eli, you've cracked the code of living at home. It's weird that everyone doesn't live at home, as there is no downside. They should remake Failure to Launch with Eli in the Matthew McConaughey role. Also because they both look the same with their shirts off.

Each of the chefs draw knives for the Elimination Challenge. They each are assigned a different part of the pig, which then must be paired with a pinot noir for an event Charlie Palmer does called "Pigs and Pinot." Jennifer picks "Wild," so she can choose any part. She chooses the belly. Eli got belly as well, and he feels blessed. Chef Palmer winks at him and says, "lucky guy." That, combined, with his Quickfire win, gives Eli the confidence to strut, so much. Such a walk, that one.

For a while this episode it almost seemed like they weren't in Vegas. Had they run out of Vegas ridiculousness? No, because when they arrive at Palmer's Aureole Las Vegas, they see the wine angels floating on bungie cords inside a see-through wine cave. What? That is a cartoon. That restaurant is like Nickelodeon GUTS for grown-ups. "Let's go to Mo on the leaderboard! In the lead is everyone, because they are drunk and rich." They taste all the wines, and Robin pretends to know what she's doing during the tasting. "So I snort the wine up one nostril then spit it back into the bottle out of the other? Got it. This wine tastes strongly of 'nose' and 'wine'." Each chef picks a wine for their dish, but I am not sure why they got to pick in the order that they did. I am not getting paid enough to rewind.

Back at the house, Robin is really messing with Eli's flow while he tries to cook a million scallops. It is getting high school-y in that house. Robin makes some passive aggressive comment and Eli storms down the stairs yelling, "You're not my mom, so cut it out!" Well, you do live with Robin, so it's easy to see how one could get confused. Robin thinks there is definitely a clique in the house. Yes. The clique is made up of everyone but you. When Robin tries to taste a scallop, the other chefs tell her it's rotten, then Mike actually says, "Rotten Robin." Yikes! Look, I dislike Robin as much as anyone, but let's all try to be friends, guys. Oh wait, no. Robin says, "I'm not here to make friends." Classic. Then you're doing great, girl!

In the kitchen prepping, the chefs are all stressed out. They need to make 150 tastings! Which is so many. Michael tells Bryan to "Shut the fuck up!" Someone comments that Michael is always trying to manipulate his brother into breaking. "He's setting a time bomb inside Bryan's head." It's like Johnny Mnemonic! His brain does not have enough megabytes to handle all of Michael's taunts.

This week's winners are Bryan, Michael, Kevin and Jennifer. It is getting pretty normal to see these guys up there. Jennifer made the lightest pork belly Charlie Palmer had ever had in his life, which is saying something because he seems like he's had a lot of pork belly. But the winner, once again, is Kevin. He is just tearing it apart. And he seems so genuinely thrilled with his prize, the chance to be the guest chef at next year's Pigs and Pinot event in California. He shows everyone the tattoo of a pig he has on his arm. Now you will never regret that tattoo.

On the bottom are Ash, Laurine and Robin. While they stand in front of the judges, everyone else gets real catty like in the Glad Supply Closet. They want Robin to go home, so badly. They call her Grandma. Oof. I bet Robin does not K.I.T. with many of these chefs. Laurine's pork rillette was a disaster. Dana Cowin called it "cat food", which the judges politely don't repeat in front of Laurine. Robin's pork dish was slimy, and not porky enough, but Robin says, "there's something really luscious about a thin piece of meat." Sure there is. But Ash once again second guessed his dish and ruined his meal. He was going to make a hot tenderloin with polenta and aged cheese! Charlie Palmer noticeably drools at that prospect. Instead he made clammy pork with no flavorings. And that's enough to send him home. Robin really is a survivor. And now we have no more Ashleys.
—Max Silvestri
· All Top Chef Coverage [~ESF~]