Share All sharing options for: Next Iron Chef City Challenge: The Final!

In advance of the October 4 premiere of The Next Iron Chef on the Food Network (9 pm), Eater is staging an elimination tournament with the chefs to determine the best food city. Two chefs a day tell us why their city is tops—and your vote determines which city moves on. Today, in the finals, Nate Appleman talks up San Francisco, and Seamus Mullen praises New York. 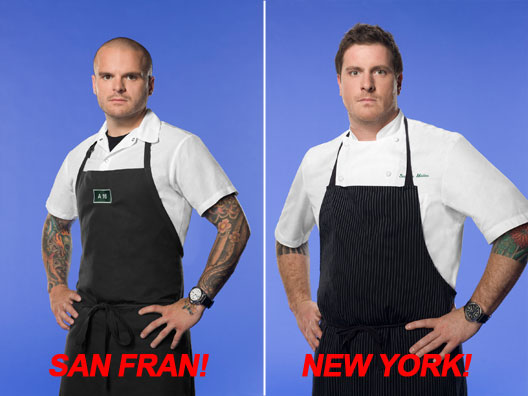 Which city is home in your chef's heart? Ideally, it's the city you grew up in.
NA: San Francisco.
SM:New York, it’s my adopted hometown.

What's the first and most essential restaurant stop when you return to that city?
NA: Spices Szechuan cuisine.
SM: Sushi. When I'm away from New York, I rarely get to have Japanese food (unless I'm in Japan, obviously). I love Soto, Sushi Zen, Yasuda, Kyo Ya.

What are three other great places in the city that you recommend to friends or visitors, with a few quick words about why?
NA: Aziza?Chef Mourad Lahlou cooks some of the most unique Moroccan food with a California organic sensability.
Lers Ros?The neighborhood may be a bit rough but its Thai food like you have never experienced Thai food before.
Arguello Market?The home of the world famous turkey sandwich, it lives up to the reputation.
SM: For refined Italian food, it's hard to get better than Marco Canora?I love Hearth and Insieme. Red Hook ballfields in Brooklyn are a must stop for Mexican and Salvadorean food. It's not exactly in the city, but a Sunday lunch at Blue Hill Stone Barns followed by a walk through the farm is one of the best dining experiences I've had in New York.

What's the dish that represents that city the best?
NA: Anything with Dungeness crab.
SM: Pizza?born in Naples, ubiquitous in New York.

Is there a special local ingredient from that city that you still incorporate into your cooking?
NA: Not so much an ingredient, but a philosophy.
SM: Long Island Fluke, Bonito and Razor Clams and Scallops. It always kills me when I'm in Europe and chefs poopoo the States for not having great ingredients or great food. The fish from our waters is wonderful fish, the Tomatoes from Jersey in August are amazing. We have great products.

A final sentence on why it's the best food city in America.
NA: It is the best food city in America because it truly embodies what great food is all about.
SM: New York City is the most diverse place in the world?no where else will you find so many people from so many cultures in one small place and there is nothing that preserves culture better than food. In the world of fine dining, it's extremely challenging to be successful in New York, we have crazy building and fire codes, outrageous rents and a very discerning and critical dining public. Most mediocre restaurants don't stick around that long.