Top Chef Episode 10: This Prick Is Big And Getting Bigger

Share All sharing options for: Top Chef Episode 10: This Prick Is Big And Getting Bigger 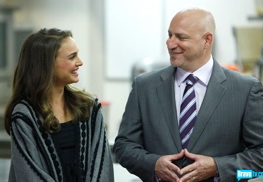 There are only seven cheftestepants left! It is almost hard to make jokes at this point because how real this is all becoming. There is just so much at stake. Who is going to win the feature in Food & Wine Magazine?! One thing about people on TV is that they really want and need to get in magazines. "What's hard about being on a popular show is that too many people know who I am. I just want people in dermatologist waiting rooms flipping past pictures of my face." This week's episode had me on the edge of my bed. Laurine's gone home, the Voltaggios are trying to smother each other in their cribs, Robin is still here, and I have a feeling this season is going to win the Oscar for Best Serious Documentary.

James Beard Award-winning Chef Paul Bartolotta who, like a holding cell, is a popular Vegas institution, is our Quickfire judge. The challenge this week is all about TV Guide paying a few thousand dollars to Bravo. The "editors" of that "magazine" have chosen seven television shows to inspire the contestants' TV dinners. Great job, editors. I don't know how you juggled closing this week's issue of your ridiculously irrelevant publication and picking out seven of the most popular television shows of all time. "Stop the presses! That rerun of According to Jim actually airs at 6:30pm and is the one where he is lazy and makes and mistake, not the one where he is lazy and has to apologize to somebody!" Someone should mail them a signed headshot of Jon Cryer for their tireless efforts.

Robin, assigned to cook a dish based on Sesame Street, is left scratching her asymmetrical magenta helmet. She was raised on health food and was not allowed to watch television, which explains a tremendous amount about her. Like, so much. I sort of want to re-watch the whole season now armed with this information. (No, I don't.) It's like finding out somebody was home-schooled, or has a gigantic penis. "Oh, this is why you act like that. I couldn't quite put my finger on why you thought you were so special, but now I definitely don't want to put my finger on it." Eli is confused by Gilligan's Island, never having seen it on account of it coming out before his time. Huh? Yes, if only there was a way to see television programs again once they've aired once. Even just a channel dedicated to that would be super, or a penetrating pop culture ubiquity that makes actual viewership irrelevant to knowing everything necessary about the program. Oh well!

Padma asks Chef Paul to pick two dishes for "cancellation." Yuck, come on, Padma. You can do better than that. How about what three shows are nominated for Golden Nopes? Just kidding, that's worse. Jennifer made a very disappointing pea salad, and Robin's weird ass hamburger thing looks dry and disgusting. She says she was inspired by the colors of Sesame Street, and their big eyes. That sounds delicious! 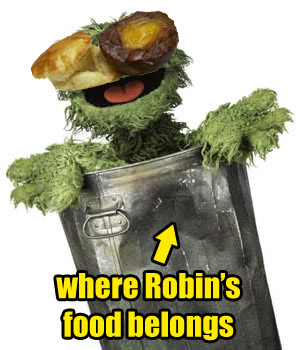 Two chefs are also up for "syndication," because ha-ha nothing is funnier and more relatable to regular viewers than the complicated economics behind off-network sales of broadcasting licensing rights to local affiliates and the subsequent financial benefits those sales reap for the show's producers. Kevin's meatballs and Bryan's meatloaf are the ratings winners. I was worried about Bryan when he said he was inspired by MASH being set during the Korean War, when no doy it was actually an allegory for the Vietnam War, but luckily that annoying trivia didn't matter. Kevin wins, and his prize is that a version of his dish will be part of Top Chef's line of TV dinners for Schwan's Home Delivery Service. What an honor! He says he his excited his grandmother might be able to order his dinner, that he based on her cooking, out of a catalog he knows she gets. In the comments, feel free to count all the ways that is sad.

The chefs have a chance in this week's Elimination Challenge to cook at craftsteak, Tom's Vegas restaurant which serves steak. Steakhouse cooking! Everyone here loves cooking steak and meats and literally cannot wait to get to cooking a meat-based entree. "One thing we will definitely be doing is applying heat to meat and then having people eat it." Everyone brainstorms what animal they are going to cook and how. The next day in craftsteak's walk-in they pore over the different animals. "Which animal do you choose? We each must choose one animal that will get served!" Right? That's how that goes. Dummies.

Chef Tom introduces a special guest judge. It's famous acting person Natalie Portman! Oh my. Eli says that the most important thing she's done is Star Wars, which is the most important thing anyone could have done. Hah! Eli loving the new Star Wars trilogy says a whole lot about him, along the lines of what I said above about finding out someone has a gigantic penis. Except the opposite. You get what I'm saying? Speaking of, the way in which the male chefs completely took apart Ms. Portman with their eyes made me blush. Do you know what they do to guys in prison who imagine what Mike Isabella clearly just imagined? I don't know, but I would not be mad if he found out.

Natalie tells the chefs she is a very adventurous eater, but only if you consider putting agave syrup instead of honey in your tea as a Big Adventure. She doesn't eat meat! Or fish, it seems. Everyone sure is disappointed. But what about all those steaks? Throw 'em away. Even though Natalie probably doesn't eat meat specifically so she can reduce her impact on the environment, the chefs have touched all those steaks and they need to be destroyed. Circle of Life.

Robin is excited when she sees all the produce they have to choose from. Fresh garbanzo beans! She has never even seen them before, because her parents did not let her watch fresh garbanzo beans when she was growing up. So despite having a strong background in vegetarian cooking, she decides to cook with the things she's never used. With all those brains it's no wonder she keeps that helmet on so tight. Eli and Jennifer both want to use the big eggplant, so they flip a dehydrated orange peel for it. This is just like how they decide the start of football games, except all the way on the other side of the Gay/Straight Color Wheel. Jennifer, per usual, is overwhelmed, upset, disappointed, nervous and in the weeds.

Natalie and her friends gather around the table to eat with the judges. What nice friends. We all have friends like that, with whom we fly out to Vegas to eat a meal on television. "I'd take a bullet for you, Natalie, assuming you paid for my flight to wherever the gun is." Robin's plate is cold garbage, and she didn't even get her fancy beans on all the plates. Bartolotta has to share his beans with Tom. It is very tender. (Paul's beans.) Everyone is really impressed with the texture of Eli's eggplant dish, though Paul gets a bite of lavender and compares it sucking on a bar of soap in Provence. Everyone laughs like the King of France just read a limerick. "Delightful, sir!"

Michael decides to blow minds with another Cubist creation, featuring banana polenta. People love comparing Michael's cooking to Picasso's painting because that is one painter they can think of. Natalie is delighted and confused and intrigued and aroused and tickled by the dish, but it makes Chef Paul want to kill himself just so he can roll in his own grave. I mean, I am rooting for Michael but banana polenta sounds like a nightmare. Jennifer sauces her dish for all the judges and is so nervous she spills on everyone. It is hard to watch. She is literally crumbling! Poor girl. Isabella fumbled with getting direct heat on his leaks and ends up serving an undercooked leak has his main protein, despite it having no protein.

Bryan's dish is next, and everyone has lots to say about the garlic blossoms. Padma Wineshmi puts her prick-shaped foot in her mouth multiple times. "They are like a little prick on the tip of my tongue. I mean, they are very tiny in size, but they get big in your mouth. God, shoot, what I mean is, I like to eat this as much I like to put pricks in my throat." Etc. The judges all have enough fun with this moment that there is not a lot for me to say here, other than I hope the woman who yelled "Someone had to say it!" made sure to finish every last bite of her poison course. Meanwhile, Eli's dish is very beautiful and Kevin's is less so. When your instructions to the waiters are "put the brown streak in front" you are not shooting for Style Points.

Kevin, Michael and Eli are on the top. Eli is very relieved to finally be near the top. Everyone busts his chops that there must have been a mistake, which is cute but also must sting a little. Natalie says to Michael that his dish made her want to ask "who is this guy's dealer and does he want a client?" What a drughead, that one. We all know how dealers have "clients" but are not always sure they need more. "Sorry, I am not taking on any new clients right now. Sincerely, a Businessman." But Kevin's meaty, rich kale and mushroom dish is the winner. He gets a bunch of kitchen stuff! And boy oh boy is Michael upset. "I could have made that the second year of my apprenticeship." Well then I guess you should have you big dumb loser. Get a teardrop added to your spoon tattoo and cry about it.

Robin, Jennifer and Mike land on the bottom. Jennifer can barely keep it together. In the course of explaining her failure she more or less apologizes and says goodbye? One thing at a time, girl. Robin says about a thousand words rationalizing her trash, and seems dumb. Mike is aware he screwed up and feels terrible, as he has lots of experience with vegetarian cooking. He made some mistakes, and he was underprepared. He didn't have a lot of stuff he normally uses, "my yogurts and stuff." Give this guy his yogurts and stuff! He needs them. It's like when the Joker says in the first Batman: "where does he get those marvelous yogurts?"

In the first real shock of the season, Mike's yogurtless leeks are enough to send him packing. Wow did I not see this coming. For all the the flack I give this douchechill, his cooking has been pretty consistent and he was not someone I expected to see go before Robin and Eli. But it just goes to show that we are at the point where one bad dish is all it takes. Bye Mike! Even Robin knows she dodged another bullet. "I've been on the bottom more times than I'd like to admit." Enough.
— Max Silvestri