Share All sharing options for: Top Chef Episode 7: Look At This F**king Cookstr.com 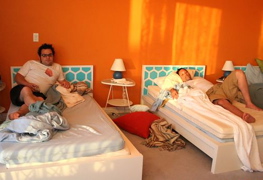 How'd you guys hold up last week with no new episode? It sure was hard. I didn't know what to do with myself! I just got on a plane and told the pilot, "I don't care where you fly me, as long as it's away from here." And he said, "This is not a plane, this is a bus." He was right. My whole week was a bust. That is until I heard Padma was pregnant. A literal miracle! I heard Gail was the father? The person who told me was my dreams. But seriously, I hope there is no father and that Padma is carrying a litter of clones and they come out of her full grown and just love to hang out and go to dive bars and watch House. That'd be great. Next season is gonna be boss, though, with a pregnant Padma as host. She is going to eat so much! "For this week's Quickfire, you have to make unlimited pancakes with all the fixings and also cheese and pepper sandwiches. This is a high stakes challenge, so the winner gets to rub very expensive olive oil on my perineum."

In the meantime, we have to put up with an unfertilized Lakshmi and an ever dwindling pool of chefpetitors. They've all worked really hard to be here. Ash, for example, has fought and scrapped his way up the culinary ladder, despite being a "kid from the suburbs." Oh man, it sure must have been hard for him, being white and upper middle class. He had every disadvantage, or you might even say that the cards were not stacked in his favor. (Vegas!) "Things weren't easy around the house. Like when I was in high school, the flaming yellow Sony Sports Discman was released in October, but I had to wait until Christmas to get it as one of my thirty presents. It was a Dickensian nightmare."

Tyler Florence, the Ultimate Television Star, is this week's guest judge. He looks like if Rocco lost a lot of boxing matches and then drowned his sorrows in malts, but he is on TV constantly, so he must have something we don't. (Incriminating video of the President of Food Network.) This week's Quickfire somehow involves the website Cookstr.com, which is a very easy name to hate. It lets you search recipes by mood? Guys, don't all log on at once. It's weird I am even writing this recap because everyone on the Internet has already replaced all their bookmarks with "Cookstr.com." All the other websites should just shutdown and pay Cookster 25 dollars, you know what I'm saying? Anyway, the site doesn't even seem to work. I went to the site and typed in "piping, hot, vomit" because I am very hungover and it returned 0 results. Beta, indeed.

The chefs all go over to a word slot machine (Vegas, baby! You're so slotty and you don't even know it!) to find the three key words that will inspire their dishes. It seems like two out of every three words is "stressed" or "Asian" so I think we have a bit of an idea of who the spiteful PA is that had to put this inane machine together. Ash gets "lazy, broke, spicy." Is that racist?

Tyler's least favorite dishes are Eli's, sick Jennifer's, and Robin's "Middle Eastern" dish, which was a curry. Padma says to Robin, "Curries aren't Middle Eastern." To which Robin responds, "Um, yeah, I guess, technically, durrrrrrr." Nice one! Tyler's favorites are Mike Isabella's, Kevin's and Michael's. Kevin had never even cooked Asian before! God I love that guy. I want to move in and live in his beard. "Usually when real estate brokers describe a space as cozy, it means small, but this time it really is cozy!!!" That's what I'll say after I move in. Kevin gets the choice of 15k or immunity, and being the best chef on the show, he takes the 15k. Correct.

Back at the house, all the chefs think it's time to relax. Definitely! You will definitely be doing nothing but relaxing. I'd run a bath if I were all of you. Oh wait, nope, sorry. Time to cook a gigantic family style meal in two hours for a bunch of chef/owners. I'd name them all here, but they are getting enough press just being on the show. I will call them all Steve. The chefs all draw knives and are paired up with one Steve each. They take a bag of Steve's signature ingredients and run back into the kitchen. Isabella and Eli both trip, because sometimes God smiles on us.

Mike is disgusted to be paired with Robin. She talks so much and is dumb, according to him. But same goes for Mike, according to facts. Mike says, "I give her little things to do, and then throw them out." Someone should throw him out! Ash and Michael are paired and Ash basically put a tiny saddle on Michael's junk he is riding him so hard. "Michael is the most genius correct cook I've ever met. He is a savage monster, a sexy beast, and the best thing to happen to cooking since fire." Eli and Ashley work on gnocchi and prawns, which Tom thinks is stupid. I have a feeling he will be right! Ashley knows gnocchi well, she thinks, but Eli overseasons them. Uh-oh. Michael and Ash run into a problem when their plancha blows a fuse and they are stuck with quickly cooling halibut and no heating surface. This is going to be a mess.

At the judges table, Padma offers wine, immediately, while Tyler makes a really awkward cue card speech of about Macys.com and charity.

The top dishes are Bryan and Laurine's and Kevin and Jen's. Bryan's chorizo-sherry vinaigrette impressed all the judges, but it was Kevin and Jennifer's dish that Toby took home in a doggy bag. (He went home between the dinner and the judges' table? Doesn't he live in London?) Jennifer's sauce was the best though, and she is this week's winner. I forget what she won but I'm sure it was GREAT.

Michael, Ash, Ashley and Eli are sent in as the bottom pile. Kevin tries making small talk with Michael's brother in the supply closet, and he doesn't have any of it. Ugh, what a jeer. Turn that stool right side up, Bryan. Ash gushes even harder about Michael in front of the judges when asked about why he kept deferring to Michael. "Would you tell the sun to shine less bright? Would you tell Picasso to paint with a different color? I heard a story once where Michael was cutting carrot sticks and a man came up to him and said 'Oh my god, you are that famous cook, MIchael! May I have a carrot stick?' and Michael said 'Sure. One million dollars, please' and the man said, 'but that only took you ten seconds!' and Michael said, 'Yes, but it took me fifty years to learn how to do that in ten seconds.'" Profound, yes? Anyway, it is Ashley's salty gnocchi the judges truly detest. And despite it being Eli's fault, Ashley takes the blame and is going home. And she is not happy! Eek. Eggli seems very embarrassed. Because it's his fault.
—Max Silvestri
· All Top Chef Coverage [~ESF~]