Share All sharing options for: Meadowood's Insane 12 Days of Xmas, Morrone With K2

Have a hot tidbit for EaterWire? The tipline is always open for business. 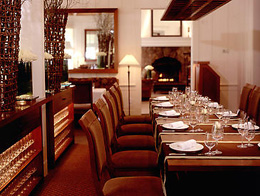 NAPA—Speaking of The Kostow, Meadowood's annual 12 Days of Christmas lineup has been announced, and it's even more star-filled than in years past. It takes place the first half of December and among the superchefs on the lineup card are Marcus Samuelsson, Paul Liebrandt, the Animal guys (Vinny Dotolo and Jon Shook), Laurent Gras and many more, including a few local faces. [EaterWire]

VEGAS—Fun fact: there is a such thing as the World Series of Beer Pong. It takes places in Vegas (duh) and the tournament champs receive a check for $50,000. Read that again. $50,000!!!! For throwing a dirty plastic ball into a cup of warm domestic beer and watching your opponent chug. [Eater National]