To thoroughly enjoy the glory that is Top Chef Vegas, we welcome back comedian Max Silvestri, who has been here every week to take us through season six. Let's have a hand for him. 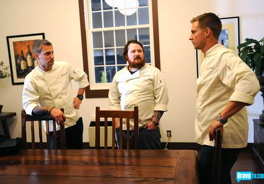 Let me catch my breath, Top Chef! What a tremendous season it's been. We started with seventeen chefs, and after a long ride filled with the poker chips, high stakes challenges, slot machines, showgirls, loan sharks, Blackjack, hangovers, glitter, and surprises, we have just three chefs left. Are they the best final three ever? I say "yes!" especially for the purposes of this post. Kevin, the Crown Prince of Ham, and the Voltaggios, two sides of the same coin if the head on that coin was restraint and the tail was creativity and also each side of that coin was the other side's brother, anxiously await their final Elimination Challenge to decide who gets the grand prize of 125,000 GladWare baggies and a feature in Gail Simmons's dress and the title of Top Scallop.

Kevin says to no one in particular, "How come mine's always bigger than everyone else's?" Is he referring to a cup of coffee or his collection of wins this season? Well, he's referring to the coffee, but it is true he's got the best record going into tonight. Don't think the Voltaggio brothers are underdogs, though. The Vegas odds may be against them, but Bryan is the most controlled chef in the competition, and Michael is the most surprising. Plus, they are brothers. Has anyone mentioned these guys are brothers? I think it's important to point that out. They are competing to see who is the better cook and truly pleases Mom the most! Mom is tired of buying two sets of presents at Christmas and wants to sort this whole thing out once and for all.

To win this television show, the chefs must prepare a three course meal. The first course must be made with every ingredient from a mystery box. That challenge is a good test of their real world ability to be forced to cook with random bullshit. Sorry, I mean Real World in that no, that would never happen. "Chef, the Queen of England has just arrived in the restaurant! And she is demanding a meal made only with things in her purse! If we don't do it perfectly, King Arthur said he'll cut your head off with Excalibur which like everything else in this scenario is completely fictional." The second course is wide open and the chefs are allowed to use anything they find in the kitchen. And lastly, they must make a dessert. Do you think Kevin will find a way to use pig in his dessert? I am going to go out on a very ham-smelling limb and say "yes." Bryan is quietly a prick about this challenge, saying all well-rounded chefs should dabble in pastry. "Any robot should be able to make a dessert. Sorry, I mean that I am a robot and able to make this dessert. What I mean is anyone should be able to make a robot. I am tongue tied! Only my creator is able to make this robot I mean me, I was built by a person. Also, dessert."

As is the custom with these finales, the final three chefs have some help in the kitchen. Is it Rocco? I wish. In my dreams. (I am just kidding. Rocco is in your dreams.) The real twist is that all the previous competitors come rolling through and present themselves up as possible sous chefs. Ron? Eve? The look of excitement on the final three's faces is extremely noticeable! 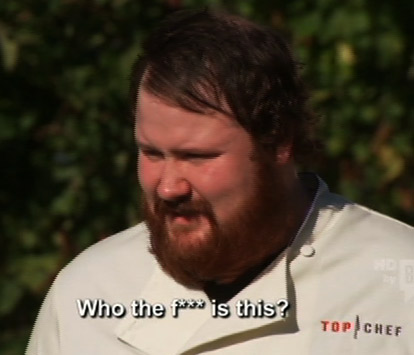 Michael says it best: "There's a couple names that if I pulled the knife out and their name was on it I'd probably just slit my throat with it." That would make for very good television! Bryan draws Jen and Ashley, Michael draws Jesse and Eli, and Kevin Preeti and Ash. Kevin is tremendously excited to be working with Preeti. The Gruesome Twosome: that's his nickname for their awesome team up (because he might pull a Michael on her). Side note: it was cute how short a shrift was given to the past competitors. No one seems particularly happy to see them, there are no introductions, and there is not even a good-bye to the chefs who did not get picked to assist in the final elimination. Bye losers! That is what we are saying to them.

The chefs get a look inside their mystery boxes and they're bananas! I mean, not literally. It'd be a little easier if the boxes were just filled with bananas. What I'm saying is the ingredients inside are nuts. Sorry, that's confusing. They are not actually nuts, either. The boxes have totally normal everyday foods like Pacific rockfish, Dungeness crab, kabocha squash, Meyer lemons, matsutake mushrooms, deflated volleyballs, anti-aging moisturizer, Klaatu Barada Nikto, four tree stumps, loose pennies, a jack-o-lantern with candles still burning in it and Carson Kressley from Queer Eye. Good luck prepping a dish with that! They should just puree everything and put it on a hot dog then throw the hot dog at Toby Young's face.

The chefs have three hours to prep the day before. Bryan's very controversial and out-of-character strategy is to "stay focused." Woah, settle down, Bryan. It's really important to be true to yourself at this point in the competition. I am kidding. That dude is always focused. "My strategy for getting up and going to pee this morning is to just stay focused." The joke there is that robots don't pee. Michael's anxious about what to do with these mystery box ingredients. What tension you are creating, Bravo! Kevin's all cranky about Preeti because she's peeling one grape an hour or whatever. You need to be like Bryan, Kevin, and stay focused. Put the pee in the center of the toilet bowl, metaphorically.

That evening, the chefs hear a knock on the door. They expect Padma and one of her patented finale curveballs. It is each of their mothers! I mean, there are two mothers for three chefs. Bravo really pinched some nickels by putting two relatives in the finale. Everyone is so happy to see their moms. I bet Eli is really pissed he didn't make it to the finale now. But his Mom's all, "Eli, why are you mad? I'm here with you now in the home we share!" And he's still like, "Yeah, but it would have just been nice to be together in Napa with you." Kevin's mom inspires him to get out of his funk. He says there's no quitting now. Huh? Who said anything about quitting? Why would you quit? You are 10 hours from the finish line, you lunatic.

The final curveball, after a bunch of curveballs, is that a fourth course is to be added to the Elimination meal. The chefs must make a dish dedicated to their moms and inspired by a childhood memory. Michael hated broccoli when he was young so he's doing a crazy pureed and fried broccoli dish. Kevin is making chicken and fixing, because his mom is the sort of classy lady who loves fried chicken skin. Bryan gets to work on a tuna noodle casserole after querying his memory chip for "Childhood 1.0."

The finale's table is filled with moms, hosts, and restaurateurs. Everyone stresses that this dinner is the opportunity of a lifetime. If the chefs do well, they might get to work with a prestigious restaurateur like Drew Nieporent or Stephen Starr! (That almost certainly won't happen, but oh well.)

Kevin serves up his mom tribute first: Southern fried chicken skin with a liquid squash puree. The table loves this one, and Tom says the broth is like a wine that he keeps going back to and finding new things. Bryan serves a sardine and bread crumb play on tuna casserole, which is the least seasoned dish. Michael does his wacky broccoli thing. The spot prawn falls flat for everyone, but Donatella Arpaia loves it.

The second course is mystery box! I won't describe all the dishes here, but know that they combined the ingredients I talked about above. Kevin nails another delicious broth, but his matsutake mushroom is tough. Bryan's dish seemed safe and on the bland side. Michael wows Tom with his combination of Meyer and squash. It's Douglas Keane's favorite.

Next we get to the course where everyone should shine. Right? I mean, Kevin has been chomping at the bit to nail his pork belly, and he is Professor Pigdick so it should really be perfect. But it's not. The pork belly might not have been cooked long enough, and the judges are a bit disappointed with how simple the plate is. Bryan's venison gets no complaints from anyone: perfectly cooked and perfectly seasoned. Michael's squab impresses as well, but Gail is not impressed with his mushroom puree molded into a mushroom. This is Top Chef not Top Gimmick.

I can't tell you how disappointed I am they forced a dessert challenge on the chefs. Oh wait, yes I can: very. What a waste. Sweet tooths are for pregnant women and babies. Have a glass of brandy after your meal and be a man about it why don't you. Kevin does something with bananas and bacon, Bryan does a sheep's milk cheesecake, and Michael overcooks his chocolate caramel coulant. That's all I'll say about that. Not one of the three seemed spectacular, but the judges make a point to say that Michael's seemed a correct cooking time away from making a great dessert.

At the judges' table, the chefs each explain why they should be Top Chef. Bryan states simply that he expressed his cuisine accurately over the course of the season, and that's what means to most to him. Michael charms with a joke about only caring about Bryan not winning. Then he says cooking in his blood, along with leaked ink from his tattoos, and it's the only thing he has or ever will get a paycheck for. Kevin made soulful food that speaks to who he is.

We first found out who isn't Top Chef: Kevin. A real shame. I was pulling for this guy, and I know a lot of people reading were too. But he had a bad day. His game seemed off, and he somehow psyched himself out from the moment he was told the Elimination Challenge. Maybe it was Preeti's fault, maybe the editing just made him seem a little sloppier than he really was, but it's rough that for the second year in a row the most successful chef during the season gets eliminated after a bad day.

And now we get a brother finale. Who is the better brother? As the episode spent 45 minutes making Michael seem a lot more likable than he had been in the entire season leading up to this, I think it's pretty clear whom we must now accept as King. Michael Voltaggio is Top Chef. My friend Abe sent me this text message last night: "Michael Voltaggio is a mean-spirited cunt, and I hope he buys 125K of heroin and overdoses on it. I've never hated a winner so much." Abe is probably overreacting. But I do feel that much like with Mike Isabella, Bravo spent an entire season lazily crafting Michael into a villain figure when the reality is he got along with everybody pretty well and earned everyone's respect. But now they want us to be happy for someone we've been told to dislike. Fine. I am very happy for Michael Voltaggio and I hope he does not overdose on all that heroin he will surely buy.

But Kevin should have won.