Boot and Shoe, Gather and Eve All Debut in the East Bay

Share All sharing options for: Boot and Shoe, Gather and Eve All Debut in the East Bay

Spot a new opening on your block for The Dish? Do share with the class. 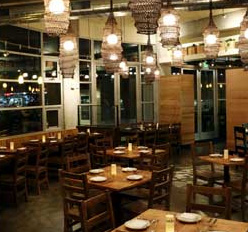 1) Oakland: Over the weekend, Charlie Hallowell's neighborhood game-changer officially shed its "soft opening" status. As reported earlier, the anticipated sequel to Pizzaiolo goes by the name of Boot and Shoe Service, an homage to a prior tenant. Reservations aren't taken and be warned that there are only a handful of tables. Open Tuesdays through Saturdays; more background in the Eater Archives. 3308 Grand Avenue, between Lake Park and Santa Clara Avenues, Oakland; 510-763-2668 [EaterWire]

2) Berkeley: Pictured here is another newcomer to the Easy Bay, Gather. It's part of the big-time David Brower Center, and for your reading perusal, the website lists all the values held by its "food activist" owners (Ari Derfel and Eric Fenster) and Millenium vet/chef Sean Baker. For now, the restaurant, cafe and an all-organic bar is open only for dinner, but lunch/breakfast will roll out in early 2010. 2150 Allston Way, at Oxford, Berkeley; 510-809-0400, website [EaterWire]

3) Berkeley Bonus: Finally, Eve Restaurant also opened last week. It's a New American restaurant from husband-and-wife team Christopher and Veronica Laramie, who fulfill the roles of executive chef and pastry chef respectively. There are only 28 seats, tasting menus are available (Three courses = $33, five = $55, seven = $77), and the place is being billed as using avant garde techniques with "creative twists on familiar flavors with influences from Latin America, Europe and Asia." 1960 University Avenue, near Milvia, Berkeley; 510-868-0735; website [EaterWire]