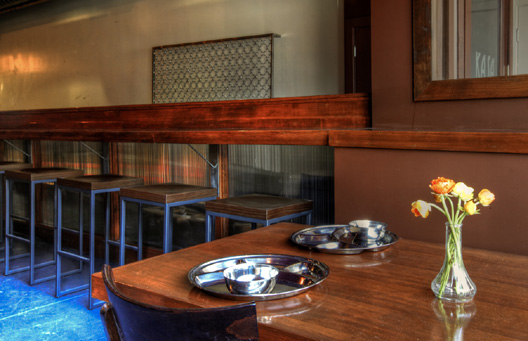 1) The Marina: The second location of Kasa will roll out tonight tomorrow (maybe) on Fillmore, right next door to the dark PlumpJack Cafe. As first reported way back in July, the Kasa sequel—or as it's been dubbed, K2—is pretty much the deal as the Castro original, though as you can see, there are some visual tweaks. It's also bigger: 65 seats and an outdoor patio. Other key facts: open until 2AM Thursday through Saturday, Indian sangria, and four beers on tap ($24 pitchers of Belgian Tripel Karmeliet, $9 pitchers of PBR). Update 4PM:: Aaaaand we have a false start: "Bummer. Not opening tonight. Hoping for lunch tomorrow. Will update here as soon as we can." Second Update: Certified open as of Saturday 12/19. 3115 Fillmore Street, between Filbert and Greenwich; 415-896-4008, website [EaterWire]

2) North Beach: Also tonight, Don Pisto's will shed its soft opening status after a week or two of random appearances. In the old El Raigon space (which hasn't changed much), the Mexican street food-inspired menu is a compact one, with tacos, tortas, ceviches and a few mains. 510 Union Street, between Grant and Stockton; 415-395-0939; website [EaterWire]