Share All sharing options for: The Dish: The Creamery, 15 Romolo, La Calle

Spot a new opening on your block? Do let us know. 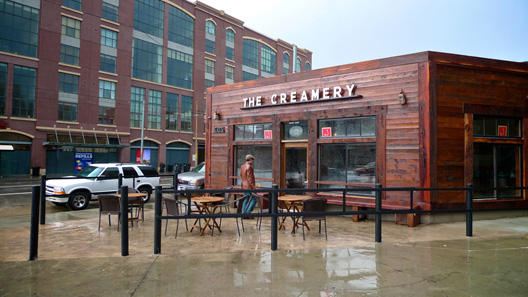 1) SoMa: Another coffeehouse has landed in the city, as The Creamery opened its doors earlier this week. The plywood vet has aligned itself in the coffee wars with Ritual (i.e., they're serving Ritual coffee), and from the looks of the interior, it's a pretty handsome space to boot. Also, the important part: there's WiFi coming in a week or so. 685 Fourth Street, between Townsend and Brannan; (415) 896-1445 [EaterWire]

2) North Beach: It's not entirely back open to the public just yet, but we thought we'd mention that 15 Romolo will likely be back up and running by the weekend at the latest and by tonight at the earliest. You'll recall the alley bar has been closed for a few months because of some remodeling. 15 Romolo Place, at Broadway; (415) 398-1359 [EaterWire]

3) Downtown Oakland: An announcement for a newish Mexican restaurant across the Bay landed in the Eater Inbox. It's called La Calle Asadero Mexicano ("asdadero meaning a place where all things are cooked on the grill and la calle translating to the street"), and is a project from the folks behind Tamarindo in Old Oakland. For now, it's open for weekday lunch only. 1000 Broadway Street, Oakland; (510) 251-1290 [EaterWire]