As you surely know by now, Wednesday's episode of Top Chef saw the end of the line for Absinthe's Jamie Lauren. Making it to the final six is no small task, however, and braised celery aside, she put together a fine showing on the national stage. Yesterday, here's what The JL had to say: 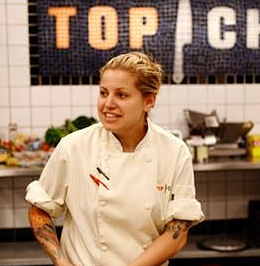 Since you were the only local, it seems like all of San Francisco—especially the industry folks—was rooting for you. What's been the reaction around town? There hasn't been a lot of reaction yet from the industry people or other chefs. All I've really noticed is that I've gotten a hell of a lot of comments on my Facebook page. I swear, every time I check my email, like 20 more people have left a comment saying I was robbed or something. And I guess people are calling Absinthe up in arms and complaining that I shouldn't have been kicked off.

Yeah, a lot of people think you got the short end of the stick. Do you think you should have gone home? I do think that, considering the dish I made, I definitely deserved to go home on this challenge. The celery was just too salty and you couldn't eat it. And since past challenges don't count, yeah, I think I deserved to go home. But in terms of it not being a cumulative competition, that part kind of sucks because I think I was one of the stronger chefs on the show.

On the whole, were you happy with the way you were portrayed? Yeah I was. I think they were pretty fair with me. You seemed like you were familiar with the show before coming on. How much did you prepare for it? Not really. When I found out I was on the show, I watched last season. But before that, I never really watched it before. I was never that person who had to rush home every Wednesday night in time to watch it, you know?

Oh we know. Let's move on to the crucial question: did Stefan really have a crush on you? Yes, he really did have a crush on me [laughing]. Here's a good story: when we were in New York in October for the season launch party, he met my mom and he actually introduced himself as her future son-in-law. But really, I think it's more that we both had a mutual respect for each other as chefs and that's really what that was about.

Is Carla as enjoyable in person as she is on television? Yes, she is. She's awesome. When she first started doing the "hootie" thing, I was like what's going on, but she's awesome. And she taught me how to shuffle cards. We played a lot of cards in the apartment.

How's Absinthe doing? Did you get a swell once the show started? Absinthe has always been a pretty busy restaurant and we're still busy, so in these economic times, we're pretty lucky. And for me to be on Top Chef is definitely not hurting things [laughs]. A lot of people are coming in and asking meet me. It was a little weird at first but I'm getting used to it.

So what's next for you? I'm not sure. I'm really happy at Absinthe right now, but who knows what's next. Maybe sometime after the next year or so, there's a chance I'll move back to New York. I'm from there, my family is there and i still know a lot of people there. But I'm really not sure.
· All Top Chef Coverage [~ESF~]