Spot a newcomer in your nabe for our opening report? Operators are standing by. 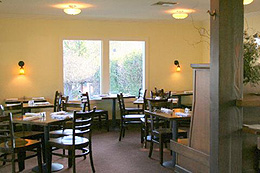 1) Lafayette: Opening its doors for the first time for today is Artisan Bistro. It's the first project from the talented John Marquez, the former Fringale chef whose resume also boasts heavyweights like Coi, Per Se and the Laundry. Artisan took over the space from Gigi, which closed less than a month ago, so don't expect a big visual change. Menus are up online; open for lunch and dinner. 1005 Brown Avenue, Lafayette; (925) 962-0882; website [EaterWire]

2) Civic Center: In the former Cafe do Brasil space on Market, plywood alum Neptalia has made its debut. It opened for breakfast and lunch last week and will start dinner service tomorrow. The name derives from Nepal and Italia, but as of now, chef Nick Cozza is serving up Italian fare. Nepalese food may start in a few months. Update: Neptalia won't be serving Nepalese food, just American breakfast and Italian lunch and dinner. 1106 Market Street, at Seventh; (415) 255-2345; website [EaterWire]

3) Berkeley: Speaking of plywood vets, Cyprus has opened on the high-profile corner of Shattuck and Addison. There's a pretty thorough report on Chowhound that breaks down the Mediterranean/Persian restaurant: mostly kebabs, wraps and the like. 81 Shattuck Square, at Addison; (510) 649-9999 [EaterWire]