Have a tip for EaterWire? Operators are always standing by. 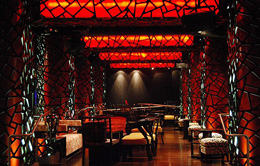 NOB HILL—Once upon a time (err, before today), the only ways to do Masa's were the $105 six-course or $155 nine-course menu. But now, for the first time, Masa's is offering a $55 three-course menu on Tuesdays, Wednesdays and Thursdays, which should make the SF fine dining classic (which definitely flies under the radar) a more viable option in times like these. [EaterWire]

UNION SQUARE—The flashy Infusion Lounge opened on New Year's Eve, and now the club/lounge is ready to roll out dinner service as well on Tuesday through Saturday, 5pm to 10pm. Executive chef Brian Beach worked under Michael Mina at Aqua at one point, and he's crafted quite the unique menu. You'll note that the items on the menu are named after emotions that "reflect the spirit of the dish." [EaterWire]

HEALDSBURG—Charlie Palmer’s Fourth Annual Pigs & Pinot festival will take place on the weekend of March 20th at Hotel Healdsburg. Michael Mina and Christopher Kostow are among the participants for the two-day event, where proceeds benefit Share Our Strength and The Healdsburg School. All further info—tickets, dates, individual events, etc.—can be had at the official site. [EaterWire]

EUROPE—Those Brits are still searching for the cause of the mystery illness surrounding the Fat Duck, but Heston Blumenthal now says they've ruled out food poisoning: "The entire menu was tested but all results proved negative. Final tests are being carried out to see if an airborne virus caused the sickness." [BBC]

CHICAGO—Speaking of avant-garde chefs, Grant Achatz may not be coming west just yet, but he's definitely working on a new concept in Chicago. Per his Twitter: "looking for a space for a new concept. Lincoln park and/or bucktown areas." Achatz tells Eater NY the Chicago expansion is not finalized yet, but it will be an "Alinea version of a bakery-coffee-culinary library- music space." If only he could put this energy toward opening a California outpost. [Twitter/ENY]