The beginning of the week saw a handful of notable openings, but still more newcomers made their debuts as the week progressed. As always, if you spot an opening that we've missed, do let us know. 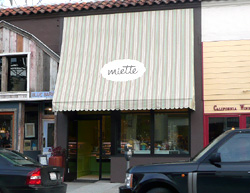 1) The Marina: In the former Moonstruck space on Chestnut (right next door to Blue Barn), plywood vet Miette opened on Tuesday. It's the third location of the sweets shops (the others being in the Ferry Building and in Hayes Valley), and they're billing it as the mini-chain's flagship location. And one more thing? Giant awning. Open daily from 11am to 7pm. 2109 Chestnut Street, near Steiner; (415) 359- 0631; website [EaterWire]

2) Marin: Last night, Toast Novato opened its door for the first time, right on schedule. It's an offshoot of the Mill Valley location, and perhaps more notably for you design buffs, it is designed by starchitect Stanley Saitowitz. We've been following the progress at Novato's Toast for some time now, and we'll have more on the finished interior next week, promise. 5800 Nave Drive, in the Hamilton Marketplace; (415) 382-1144; website [EaterWire]

3) The Castro: There hasn't been an ownership shuffle, but A Bon Port has changed its concept, and is now a wine bar called Blush. Kindly adjust your records. 476 Castro Street, between 17th and Market; (415) 558-0893 [EaterWire]

4) Berkeley: Earlier in the week, Thrillist shared some intriguing details on a new Cambodian BBQ restaurant on University Avenue called the Yellow Brick Cafe. It took over a branch of All Star Donuts, and has kept donuts on the menu to go with the meat skewers. 1255 University Avenue, between West and Chestnut; (510) 647-3776 [Thrillist]

5) Marin: Zagat brings news that San Anselmo's Fork has changed its name to Dreamfarm: "Its Ã  la carte menu of New American comfort food is sourced from the same local farms, dairies and fisheries as before, but with prices that better reflect these recession-minded times." 198 Sir Francis Drake Boulevard, San Anselmo; (415) 453-9898 [Zagat]