Spot a new opening on your block for The Dish? Do let us know. 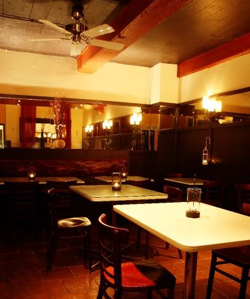 1) Polk Gulch: Finally open for business right off the corner of Bush and Polk is Moussy's. Open only for breakfast and lunch, it's in the odd and nearly-hidden subterranean space that last housed La Cave Bistro, in the Alliance Francaise complex. 1345 Bush Street, near Polk; (415) 441-1802; website [EaterWire]

2) Lower Haight: Over the weekend, Bistro St. Germain made its debut in the old Visit Thai spot after a quick appearance in the plywood report. It's a French bistro from the unexpected pairing of the former Visit Thai owner and Laurent Legendre of Le P'tit Laurent. Early reviews are mixed, and the space remains similar to its last incarnation, but we'd give it some time to get off the ground before making any heartfelt decisions. 518 Haight Street, between Fillmore and Steiner; (415) 626-6262 [EaterWire]

3) Financial District: Ladies and gentlemen, boys and girls, we might have a new contender for the most unfortunate restaurant name in the city: L'Eataliano, now open in the former Eatcetera. Oh dear. Undeterred, one proud Chowhound says it bills itself as "Italian quick food" with "an interesting selection" of panini and piadine. 388 Market Street, near Front; (415) 397-0100 [EaterWire]