Spot a new opening on your block for The Dish? Share with the class. 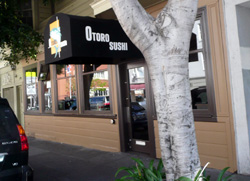 1) Hayes Valley: We noted that Otoro would be moving into the Laurel's space several months back, and tonight, the new sushi joint makes its debut in Hayes Valley, per The Daddy. Both raw fish and izakaya-style dishes are on the menu and there's an eight-seat sushi bar involved too. Should be interesting to see how—and if—it stacks up with Hayes Valley's pair of sushi incumbents, Sebo and Domo. 205 Oak Street, neat Gough; (415) 553-3986 [UD]

2) Polk Gulch: We all know that Fly Bar is slated to replace the ill-fated Brick, now closed for about a week, and Thrillist brings word that Fly Bar will open tomorrow. It's pretty much the same deal as the Divisadero branch, with two big differences: a full liquor license and "a custom, nerd-built four-player arcade unit." 1085 Sutter Street, at Larkin; (415) 441-4232; website [Thrillist]

3) Oakland: Speaking of sequels, the fourth location of Burma Superstar is now up and running in Oakland. Most details—i.e, the menu and such—are similar to the other branches. 4721 Telegraph Avenue, at 48th; (510) 652-2900 [Chron]