Have some juice for EaterWire? The tipline is always open. 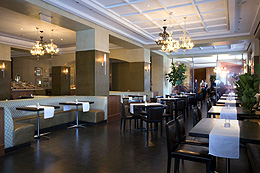 SOMA—Lady Hopstress shares the news that Richard Corbo, one of last year's Chronicle Rising Stars, will be leaving his post at Ducca. For our part, we've heard that one future possibility for Corbo involves a new pizzeria project in the forthcoming marketplace at Jack London Square. [TH/EaterWire]

UNION SQUARE—The schedule for the Bar Crudo move has been slightly delayed. As of today, the plan is hopefully to close the current spot this coming Saturday (5/2) and open on Divisadero the following week (5/8). If all goes to plan, reservations will likely be accepted a week or two after the initial opening. [EaterWire]

FROYO WARS—Pinkberry may have just closed a round worth $15 million of new funding, but not to be outdone, today, froyo rival Red Mango has announced that it has ...invented a new flavor. The new offering will be called Tangomonium, is of indeterminate ("secret") origin, has "hints of fruit," and will be released this Saturday, May 2nd. Who's excited? Did we mention Tangomonium will evoke "blissful memories of spring and summers past"? [EaterWire]