We've already seen plenty of openings in the last few fays, from Bushi-Tei Bistro to Madera to Blue Bottle, but here are a few more to round out the week. 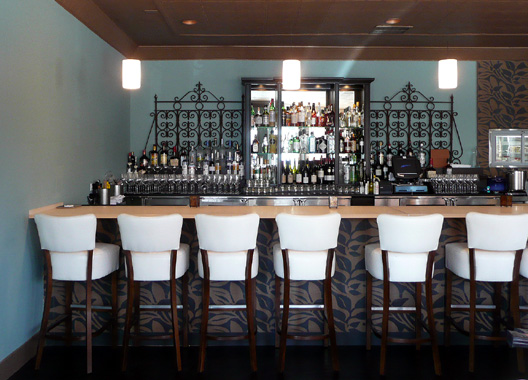 1) Russian Hill: Making its debut to a full house on Wednesday night was the adjacent lounge offshoot of La Folie, which still holds four stars. In the small former La Boulange space, the lounge's centerpiece is the 12-seat bar (above), and there are some seats off to the side as well. We hear that you can get some Roland Passot bites in the lounge too. 2310 Polk Street, near Green; (415) 776-5577; website [EaterWire]

2) Union Square: As noted by the Lady of Hopstress earlier this week, Cityhouse is now open in the Parc 55 Hotel, which is in the midst of a multi-million dollar overhaul. The restaurant bills itself as serving "American Classics reinvented for breakfast, lunch and dinner" and there's also a bar there that is called—you guessed it—Cityhouse Bar. 55 Cyril Magnin Street, at Eddy; (800) 595-0507; website [EaterWire]

3) Downtown Napa: Wine Country got something that it's been lacking: a fairly high-profile ethnic restaurant: "Neela’s is the new venture of chef Neela Paniz, the former chef-owner of Bombay Cafe in West Los Angeles ... Bombay Cafe was tremendously successful — and delicious — and it spawned 1998’s “Bombay Cafe Cookbook.” The City of Napa stands to reap huge benefits by having a venerable chef like Neela Paniz on the scene: Napa is so utterly lacking in ethnic restaurants that an establishment like Neela’s is a huge boon to the culinary landscape." 975 Clinton Street, near Main; (707) 226-9988; website [TR]